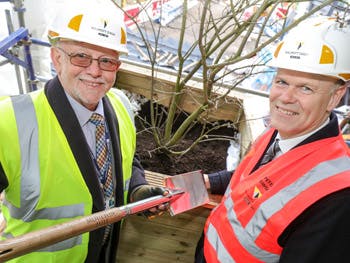 A £31 million university building has taken a major step forward as the finishing touches have been made to the development.

Contractor Wilmott Dixon were joined by staff and students from Birmingham City University at the Curzon B building to mark the traditional ‘topping out’ ceremony and celebrate a key milestone in the delivery of the facility.

The 100,000 sq ft extension to the Curzon Building, which will be home to 3,000 staff and students, has been under development since May 2016 and will open for use later this year.

Willmott Dixon and University staff planted a symbolic tree which is traditionally used to mark the topping out ceremony in its Scandinavian origin – a practice which was devised to appease tree-dwelling spirits.

As part of the project, students from the University’s Built Environment Faculty have been working alongside Willmott Dixon to gain real-life experience of working in the construction industry by putting the theory learned in the classroom into practice.

Professor Graham Upton, Vice-Chancellor of Birmingham City University, said: “Curzon B will be the latest in a line of new buildings to open on our City Centre Campus, all of which have allowed us to keep providing students with even better facilities for the duration of their studies.

“The fact that our students have been given the opportunity to play a part in developing this new building makes it even more pleasing for all of us here at the University.

This part of the city has really grown and developed in recent years and it is fantastic to see it thriving, something which is set to continue with the arrival of HS2 and the Midland Metro on the horizon.
Professor Graham Upton

Two students from the University’s Creative Writing course were also tasked with writing original pieces about the new building which were performed for attendees.

The structure will extend the University’s Curzon building, which has been housed on Cardigan Street in Birmingham’s Eastside since 2015 and continues the University’s transformation of this part of the city.

The building forms part of the University’s £260 million investment into new state-of-the-art facilities which will be strengthened with the opening of the new Birmingham Conservatoire this year.

Peter Owen, Managing Director at Willmott Dixon, said: “We are delighted to be working with Birmingham City University once again to deliver this brand new facility, Curzon B, following the completion of The Curzon and The Parkside Buildings within the past five years.

“Ongoing, active engagement with the University is a key driver for Willmott Dixon in ensuring that students are able to apply their learning to real live examples.

“As a result of our relationship with Birmingham City University we have facilitated over 3000 students visiting the site; provided 10 paid placements, whilst three past students are now employed full time by Willmott Dixon in the Birmingham region – it has been an all-round success.”

Curzon B has been designed by Birmingham-based Associated Architects and will sit alongside the city’s historic canals.