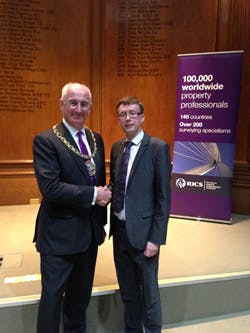 An academic at Birmingham City University has been awarded Eminent Fellowship status by the Royal Institution of Chartered Surveyors (RICS) – one of the highest honours that can be conferred on its members.

Dr Nick Morton, Head of Birmingham School of the Built Environment, part of Birmingham City University, was presented with the award by the President of RICS on Thursday 7 March at RICS headquarters in London, in recognition of his outstanding contribution to the profession.

RICS is the world’s leading professional body for qualifications and standards in land, property and construction and recognised Dr Morton as a leader in the field.

In becoming a Fellow, Dr Morton joins a group of professionals who stand out in the eyes of their peers, of business and of the public. Fellowship is awarded by select invite only, and is made on the basis of individual and academic achievement in the profession and denotes the highest standards of success and expertise.

The award reflects Dr Morton’s extensive work in partnership with RICS, both as Head of his school and as Vice-Chair of the UK’s Council of Heads of Built Environment. It also marks his impact upon the wider sector, including a considerable track record of educational development work for which he was previously awarded a National Teaching Fellowship by the Higher Education Academy.

On receiving his award, Dr Morton said: “I am delighted to have been recognised by the RICS and proud to become a Fellow of such a prominent institution. I am especially pleased to have been selected from my peer group to receive the Fellowship and look forward to helping further advance the cause of built environment education now and in the future”.