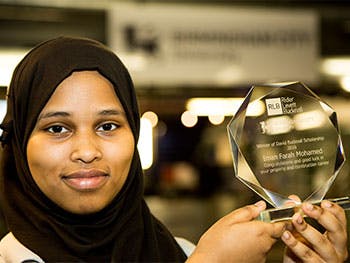 Iman Farah Mohamed from Moseley School and Sixth Form has won the David Bucknall Scholarship for 2016.

The Scholarship offers financial assistance to school leavers considering a career in property and construction and studying for a BSc in a Built Environment subject in the Faculty of Computing, Engineering and the Built Environment at Birmingham City University (BCU).

Iman will study a three year BSc in Quantity Surveying and benefit from a reduction in tuition fees, a contribution towards living costs and guaranteed work experience placements and guidance from Rider Levett Bucknall (RLB).

As part of the application process eligible students were asked to submit a short video about a building which they either really liked or really disliked, to explain why they felt this way and what lessons could be learnt for those looking to build something similar.

Iman chose Moseley School and Sixth Form itself and outlined aspects of its striking gothic style 1850’s architecture, including gargoyles, and its connection with religion. She contrasted this to the contemporary design of the new sports centre that opened this year (2016) and its accessibility to the community.

The Scholarship Board also award second place to Qasim Dad from Lordswood Sixth Form who will also be studying for a BSc in Quantity Surveying.  Qasim has been offered placements with RLB and a reduction in his fees by Birmingham City University.

Commenting on her success Iman said:

I am so delighted and excited!  I am passionate about the built environment and the David Bucknall scholarship assistance will make so much difference to me. I intend to work really hard and take full advantage of the support being provided.

This is the first year of the scholarship which was created in memory of David Bucknall OBE, founder of Rider Levett Bucknall.

He went on to become a national figure and leader in the property and construction sector.

David was well known for helping young people achieve their potential, which is why this Scholarship has been set up in his memory.

Ann Bentley, global chair of Rider Levett Bucknall and a trustee of the David Bucknall Scholarship fund added: “Iman’s video submission caught our attention immediately.  She was so passionate in her presentation of the two buildings at Moseley School and obviously has a keen idea for detail and enthusiasm for the built environment.  We look forward to helping her to pursue a successful career.”

Sir Bernard Zissman, speaking on behalf of those who supported the scholarship said how pleased they felt that David’s contribution to the industry and Birmingham would be remembered in such a positive way”.

Moya Bucknall, widow of David Bucknall added: “David would be jumping for joy that the Scholarship is now a reality and that Iman and Qasim are going to be supported in such an amazing way.  They have both shown their passion for the built environment and we wish them every possible success in their future studies and of course, much enjoyment in their chosen careers.”

Simon Handley, Associate Dean in the Faculty of Computing, Engineering and the Built Environment at Birmingham City University said: “We are delighted that we will be welcoming Iman through our doors in September after being really impressed with the quality of her submission.

“Having already proven herself to have an adept eye for the Built Environment, she has all the tools to go and have a successful career in the industry and we hope the University helps her to make the next step in her journey.”

The memorial scholarship fund is available to a number of identified local schools located in underprivileged parts of the community.  School leavers can begin applying for the next round of scholarship opportunities from January 2017 for a September 2017 term start.

Get more information on the David Bucknall Scholarship.