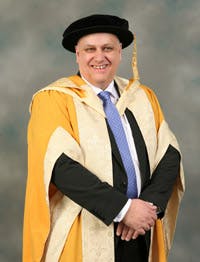 The Group Managing Director of Midlands-based construction firm Thomas Vale will receive an honorary doctoral degree from Birmingham City University tomorrow in recognition of his outstanding achievements within the industry.

Tony Hyde has responsibility for the strategic direction of the Thomas Vale Group – ensuring that a comprehensive client focus is maintained to ensure best possible project delivery through on-time, on-budget success.

Tony was appointed Group Managing Director in 2002 after previously holding the Managing Director position for Thomas Vale Construction. He originally joined the business in 1986 as Design and Build Manager and became Strategic Business Director in 1992. In 1992, he was one of five Directors who undertook a Management Buyout of the company which then had a turnover of £10 million. Today the business turns over £225 million and employs 700 people directly with a further 2000 people through its Midland based Supply Chain.

Tony has also been appointed to the Worcestershire Local Enterprise Partnership (WLEP) as Deputy Chair and as Chair of the WLEP Business Board – where he serves as a knowledgeable business partner to forge formalised partnerships across the region, including Herefordshire, Birmingham, Solihull, Coventry and Warwickshire, Staffordshire and the Black Country.

In 2009, Tony received the West Midlands Centre for Constructing Excellence (WMCCE) award for Major Contribution to Excellence and Quality in the region – presented to him by the Chair of WMCCE and fellow partners from Birmingham City Council.

Nick Morton, Head of Birmingham School of the Built Environment at Birmingham City University, said: "Tony is a standard-bearer for enlightened models of working which place long-term sustainability and social conscience at their core. A professional colleague of staff within Birmingham School of the Built Environment for some 25 years, and a loyal friend not only to the school but to Birmingham City University as whole, he is an enthusiastic supporter of many of our academic initiatives.”

Tony will receive the honorary doctorate award on Thursday 16th February at the Awards Congregation ceremony which will celebrate the work and achievements of students graduating from the University’s Faculty of Technology, Engineering and the Environment (TEE).