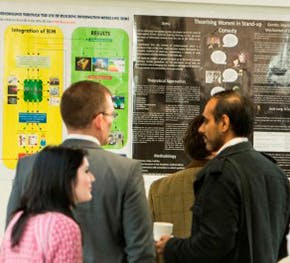 Research from the Birmingham School of the Built Environment (BSBE) at Birmingham City University has made major gains in new University rankings.

Academics who were submitted to the Architecture, Built Environment and Planning panel have moved up the rankings of planning schools in the UK, according to results published today as part of the Government’s Research Excellence Framework, which is used to distribute research funding across the UK’s Universities. The group increased the number of publications graded as world leading or internationally significant (four or three out of four stars) from 35 per cent in the last assessment to over 64 per cent. Our GPA (overall quality score) rose to 2.66. In addition, one member contributed a highly rated Research Impact case study for the Business School’s REF entry, and another contributed to the Law School’s score.

Along with other post-1992 Universities, Birmingham City University has made significant gains by demonstrating the impact that its research has had on the UK’s economy and society. Professor Mark Reed, from BSBE, has led the creation of new markets to enable companies to pay for restoring damaged peat bogs in return for the carbon that is saved. The Government launched a pilot UK Peatland Code last year based on this work in collaboration with the International Union for the Conservation of Nature, and water companies now regularly restore peat bogs to reduce water treatment costs.

Professor Alister Scott has developed a board game called “Rufopoly” to raise awareness and support decisions in rural areas under pressure from housing development around cities. The training game has now been played by policy-makers, businesses, voluntary bodies and schools across the UK, Sweden and the USA.  Professors Reed and Scott have led major components of the Government’s National Ecosystem Assessment follow on project, resulting in shortlisting for the 2014 Royal Town Planning Institute awards for planning excellence.

Professor Peter Larkham, the School’s Associate Head (Research), welcomed this clear and externally accredited evidence of the high quality and impact of their research in planning and the environment. He said: "This is a tremendous endorsement of our achievements in producing high-quality research which not only influences national and local government policy, and helps other agencies and the development industry, but it demonstrates that our undergraduate and Masters courses are up-to-date, underpinned by the best research.”

More about the Centre for Environment and Society Research