Anxiety and mental health fears as young people stress over looks, food and keeping up 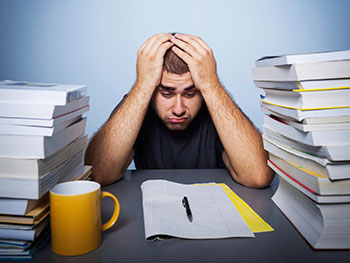 Students starting university this term say they are stressed out, worried about how they look and have concerns about their mental health.

The findings of a Birmingham City University survey of new undergraduates as they prepared to start their studies emerged ahead of National Stress Awareness Day on Wednesday 5 November 2014.

Ninety one per cent of the new arrivals reported periods of stress or anxiety in their lives in the months or years before arriving at university, three quarters said they worry about how they look, with just as many students (60 per cent) worrying about what they eat.

Responding to the findings, the University’s Student Services offered five top tips on staying well. Students themselves offered top tips on stress busting, from exercising to playing loud music or watching hours of TV on Netflix.

Forty five per cent of students admitted having concerns about their mental health, either a little or a lot, prompting Professor Craig Jackson, Head of Psychology at Birmingham City University, to say: "We know that young people have a host of significant and growing pressures in their lives – from doing well in education to getting a good job or looking great. I'm sure ghastly uber-competitive shows such as 'The Apprentice' do little to help.

"Most people have insight into when they are stressed, but roughly 3-4 out of 10 won’t be aware of what is happening to them and why. Stressed people eat, drink or smoke twice as much as they usually do. They rush around more, have more falls, get into more conflicts, have lower pain thresholds and tolerance of difficulties, and they are more likely to develop low-level mental health issues such as anxiety or depression.

"Students should always seek help with anything that troubles them, including from their personal tutors at university. We can help. We want to help. And we were all students once."

To coincide with National Stress Awareness Day the stress busting advice from students will be released on Wednesday 5 November via the University’s Twitter page @MyBCU using the hashtag #StudentTopTips.