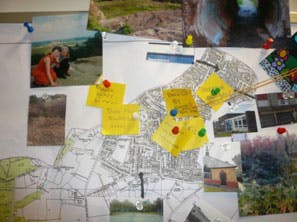 A District Council (which has asked to remain anonymous) commissioned Birmingham City University to advise it on encouraging ‘community engagement’ among its residents.

Residents’ views of the area and of the council were collected and analysed: including formal written complaints to the council, press coverage and ‘Letters to the Editor’ in local newspapers. Structured interviews were held with a diverse group of local residents.

The residents interviewed were encouraged to complete Birmingham City University training in community engagement: to become ‘champions’ of their area or, as we prefer to call them, ‘community enablers’.

Ten residents signed up for the course, including students, skilled professionals, pensioners and unemployed people. These residents committed to a number of two hour interactive sessions over 14 consecutive weeks.

The training approach adopted was the well-known concept of experiential work ‘learning by doing’. The course focused on community structure, governance and engagement techniques. The project built on material used in one of our professionally-accredited modules (Regeneration) and gave participants the option to complete assessments and obtain formal recognition of achievement. The course included taught sessions and assessment of each participant’s use of community involvement techniques. Participants learned to select, design and run community engagement exercises and reflect on their experiences.

The community enablers
The course participants now have the confidence, skills and tools to lead community projects and support other initiatives. Several projects have developed significantly, such as one enabler’s idea to clean up a local beauty spot which suffered from excessive amounts of litter which was hazardous to visitors. The enabler secured the services of the local church and a third party contractor, and his first cleanup is set to attract over 50 people.