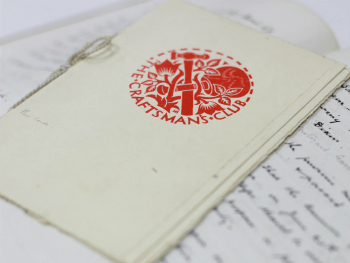 The Craftsman’s Club was a group founded in 1902 by Robert Catterson-Smith, Headmaster of the Birmingham School of Art from 1903 to 1920.

Catterson-Smith was associated with William Morris early on in his career and the two had become friends. Morris invited him to assist in the production of books for the Kelmscott Press, and, among other things, he had prepared the illustrations for the Kelmscott Chaucer from designs by Edward Burne-Jones.

Catterson-Smith believed that craftsmanship had become devoid of human feeling and romance in the age of the machine. Inspired by the ideals of John Ruskin and William Morris, a Club was set up with the aim of ensuring a high standard of craftsmanship in Birmingham.

Its members (all male) had to be established, practising artists and/or craftsmen. They included painters, jewellers, gold and silversmiths, sculptors, architects and draughtsmen. Membership of the Club started small with 21 subscriptions in the first year and between 8 and 12 members attending the monthly meetings held between November and May each year. This rose to over 50 members in later years.

The last recorded meeting, the 239th, was held in February 1939 with five members present. During the meetings the previous month`s minutes would be read and signed, and then a paper would be presented by a member on one of a wide range of topics concerned with the arts. These presentations would usually be illustrated by photographs, lantern slides, pieces of work or rubbings and a discussion would follow.

The Club also organised summer trips and annual exhibitions.The collection contains the Club’s two-minute books as well as press clippings, correspondence and exhibition leaflets. These document the interests of many of Birmingham’s leading artists and craftsmen in the first 40 years of the 20th century.