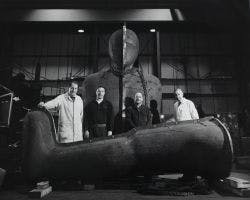 PACA was a registered educational charity, a company limited by guarantee and a non-profit organisation with offices in Birmingham, and later London. It was at the forefront of the proliferation of public art and the professional public art agency in the UK in the late twentieth century. PACA organised the commissioning of many large and small-scale public art projects throughout the UK and some international projects.

It was also contracted by local authorities to draft public art strategies, and promoted public art through seminars, publications and a series of “speculative proposals”. PACA ceased trading in the summer of 1999. This collection is a large and complex business archive and contains the financial and administrative records of the Agency.

It also contains project documentation for both realised and unrealised public art projects. This includes correspondence, research notes, contracts, briefs to artists, minutes of meetings and artists’ curriculum vitae. There are a number of drawings, sketches and proposals by artists, architectural drawings and plans as well as an extensive slide and photographic record of the public art projects managed by PACA.

The PACA Archive also includes the Agency’s library. This is a large collection of books, exhibition catalogues and journals on the subjects of public art, urban planning and architecture. In addition, the Archive contains some material that predates the formation of the Agency and relates to Vivien Lovell’s previous employment as Public Art Coordinator at West Midlands Art. This earlier material includes documentation on the sculpture programme for the National Garden Festival at Stoke-on-Trent in 1986.