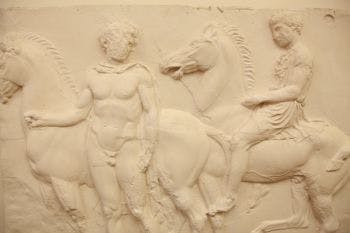 During the nineteenth century, the Birmingham School of Art, like many schools in this country and abroad, developed its own collection of plaster casts for students and teachers to use.

Artists and students have studied from plaster casts of original sculpture from classical antiquity and archaeology for hundreds of years.

In the nineteenth century, the teaching in Birmingham followed ‘The National Course of   Instruction for Government Schools of Art in Britain’. In keeping with the long tradition begun by the artists of Renaissance Italy, the syllabus of this course focused on learning by practice and imitation. It was believed that by studying and copying from the `best` (ancient and classical) examples, particularly of sculpture, students could most effectively learn and refine their artistic skills.

The course specified the exact that had to be studied and copied. For example, when studying the human or animal figure, students at the Birmingham School of Art were directed to the Parthenon frieze, of which are included in the collection. As art education changed in the 1960s, the practice of drawing from plaster casts was discontinued. With their role as objects of study being lost, many of the School’s casts were destroyed. The collection consists of 21 plaster casts of famous sculptures from national and international collections. These are mainly examples of Ancient Greek sculpture, but also include copies of later Renaissance pieces.

The exact details of when and where these plaster casts were acquired are not known. They may have been donated to the Birmingham Society of Arts c.1820 or they may be later examples from the late nineteenth or early twentieth century. There are also a number of recent copies from other held by the School of Art. The Collection is on display at the Birmingham School of Art Margaret Street building