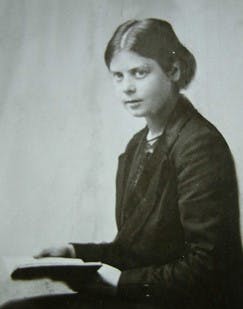 Marion Richardson (1892-1946) was an influential art teacher and pioneer of the child art movement. Talented at art, she was encouraged to sit for a teacher-training scholarship at Birmingham Municipal School of Arts and Crafts.

She studied here from 1908 to 1912, obtaining an Art Class Teacher’s Certificate. In 1912, Marion became the art mistress at Dudley Girls High School, where she developed methods of teaching art that were far removed from the traditional emphasis on copying and technical skill. Instead, she aimed to arouse children’s visual awareness, to encourage self-expression and to enable pupils to evaluate their own work. Her pupils would sit with closed eyes, perhaps listening to a description, and waited for images to appear in ‘the mind’s eye’. This resulted in vibrant, colourful and expressive paintings, contrasting starkly with more traditional pencil drawings.

In 1917, she met Roger Fry, an English artist and art critic at his exhibition of Children’s Art (Omega Galleries, London). Marion showed him a portfolio of works by her pupils. Impressed, Fry included some of them in the exhibition and began to promote her work, bringing her to critical and public attention. In 1923-24, Marion organised an exhibition of her pupils’ work at the Independent Galleries in London, which attracted considerable press interest. In January 1924, the magazine Vogue nominated her for its Hall of Fame. Such publicity created an increasing demand for her pupils’ work to be exhibited across the country and for Marion to give an extensive number of lectures to organisations and societies.

In 1930, Marion became a Schools Inspector of Art for London County Council. She held surgeries for teachers, visited schools, gave lectures and ran courses for teachers. These were extremely popular: for example, applications for 40 places on the 1934-35 course Art in Infant Schools were closed when the number exceeded a thousand.

In 1934, she toured Canada at the invitation of the Carnegie Trust and also visited the USA, giving lectures for the public, teachers and university audiences. In 1935, Marion published Writing and Writing Patterns, a set of hinged cards and booklets (developed from her Dudley Writing Cards, 1928) for teaching handwriting based on patterns and natural movements and enabling each child to make a gradual transition to a personal style. Writing and Writing Patterns remained in print and in use in schools in the UK until the 1980s.

In 1938, Marion organised a large and successful exhibition of children’s art at County Hall in London. With works by over 500 children from schools across London, it was opened by Kenneth Clark and visited by over 24,000 people including Queen Mary and her two daughters, Princesses Elizabeth and Margaret.

She retired due to ill health in 1942. In September 1945, Marion returned to Dudley, where she completed the manuscript for her long-planned book Art and the Child. She died on 12 November 1946, the day after writing the book’s dedication. Art and the Child published posthumously in 1948, with Kenneth Clark providing a .

Marion’s child centred approach to the teaching of art in schools influenced art critics and educational theorists alike. In the 1980s, the Department of Education and Science funded a series of Fellowships enabling teachers to experiment with her ideas in the classroom once again.

The Marion Richardson Collection was held by the Richardson family until it was donated to the School of Art Education at Birmingham Polytechnic in 1973. When the School moved out of its premises in Priory Road, it was transferred to Birmingham City University Art and Design Archives. The Archive covers the whole span of Marion Richardson’s career and from her first teaching job at Dudley Girls High School to her teacher training and inspection work in London. It includes letters; her personal diaries for 1930-40; unpublished papers and lectures; examples of her writing cards; glass slides and photographs of classes, exhibitions and children’s artworks; reproductions of artworks; part of her personal library (which includes books, magazines and pamphlets on art history, art education, psychology and religion); press clippings about her career, including reviews of exhibitions of her pupils’ work; recent research on her methods by teachers in the 1980s and 1990s, and several thousand examples of children’s artworks and samples of handwriting.

Marion Richardson’s correspondence spans roughly from 1917 to her death. It includes letters that make reference to Dudley Girls’ High School, private tuition, visits in England and abroad, exhibitions, lectures, enquiries from teachers and teaching organisations, her position as a schools inspector with London County Council, Christian Science, and personal friends. Among her correspondents were Margery and Roger Fry, Vanessa Bell, Duncan Grant, Gwen John, W.R. Lethaby, Herbert Read and William Rothenstein. The collection includes letters from organisations such as the: Art Teachers Guild The Burlington Magazine The Council for Art and Industry The Courtauld The National Gallery The National Union of Women Teachers The Omega Workshops Whitworth Gallery, Manchester.