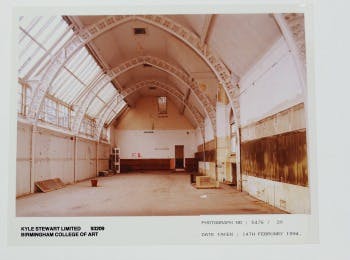 By the 1980s, many of the original features of the School of Art were either damaged or covered by surface boarding.

The Margaret Street building was dirty, leaking and badly maintained due to the penetration of damp and the deterioration of the structure itself.

Birmingham City Council funded the renovation of the internal staircases in 1988 and 1989 when a metal framework echoing the original wooden one was installed to strengthen the building. Rainwater pipes were installed and the roofing lights over the stairs were improved, but the rain continued to be a problem.

In the early 1990s, a decision was taken to undertake a major refurbishment and renovation of the School of Art. Associated Architects, who had worked for Birmingham Polytechnic on several previous occasions, were appointed architects and contract administrators. Kyle Stewart Ltd won the contract for the building work at a cost of around £5,500,000. The work began in late 1993 and finished in early 1995.

The general feeling was that the restoration of a working art school was antithetical to making a pastiche of the original in new areas. Instead, echoing the spirit rather than the style of Chamberlain and Martin’s original concept, it was decided early on in the project that any new parts would not be late twentieth-century reproductions, but would use modern methods and materials.

The major issues identified were the re-ordering of internal space, removing obsolete services and treating the installation of new ones in a sympathetic manner, meeting Health and Safety regulations, installing disabled access, lifts and new mezzanines, planning exhibition spaces and improving the roof. Important public spaces like the concourse were returned to their original specification while other areas were decorated in a manner that accorded well with, rather than replicating, the original.

The collection contains three spiral-bound volumes of reports by the City Architects’Department on the state of the Margaret Street building in 1984-1985 and a sequential series of colour photographs taken by the builders Kyle Stewart Ltd that document the progress of the restoration of the School of Art in Margaret Street in 1994-1995.