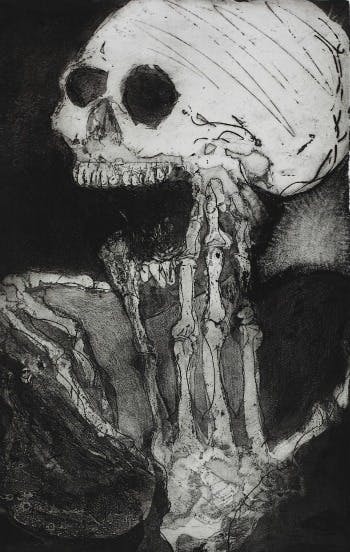 Birmingham School of Art dates from 1843 and was located in New Street by 1858, these were no longer adequate and the School moved into premises in the newly-built Birmingham and Midland Institute in Paradise Street.

However, the facilities were still insufficient to cope with the growing number of or to meet the demands of local trades.

In the early 1880s headmaster Edward R Taylor with the generosity of local benefactors such as the Tangye brothers, Cregoe Colmore and Louisa Ryland, persuaded the Birmingham School of Art Management Sub-Committee to sponsor the building of a new purpose built art school at Margaret Street.

The architect, John Henry Chamberlain sought to create a building that was not only but one that was morally and spiritually uplifting. Designed in an elaborate Venetian Gothic style, its internal and external decoration reflects John Ruskin’s ideas on nature as the fount of all knowledge in . Particularly noteworthy is the circular ‘lily and lattice’ panel on the Edmund Street elevation and the entrance hall, which has colonnades of polished granite columns with stone capitals, each carved with different plants.

Sadly John Henry Chamberlain died in 1883, two years before the building was completed in 1885. It was finished by his partner, William Martin, who was also the architect for the extension to the building in 1892-1893. This was to provide space for workshops in which students might carry out their designs in the materials for which they were intended, something that was considered revolutionary at the time, but was greatly encouraged. The School is now a Grade I Listed Building.

The collection is made up of twelve unframed prints, some printed at the print studios at Margaret Street and others at Jean studio in London. This portfolio is number 24 of an edition of 25. It contains original art prints by members of staff of the School of Fine Art, namely Mel Gordon, Trevor Halliday, Jess Hand, Nick Jones, Kim Kempshall, Alan Miller, David Prentice, Ted Rose, Alison Saint, Harry Snook, Keir Smith, and The collection also includes typed lists of both the staff contributing to the portfolio and the 24 organisations that accepted copies of it.