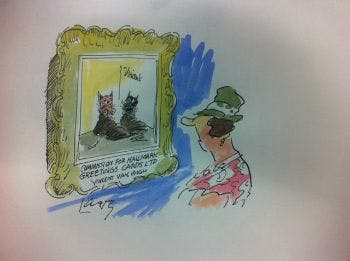 Terence ‘Larry’ Parkes (1927-2003) was a cartoonist and illustrator. He was born in Birmingham and studied at the Birmingham College of Arts and Crafts in the 1940s.

After qualifying as an art teacher, he taught art at Lincoln Road Secondary Modern School in Peterborough, Lincolnshire between 1951 and 1954.

In he became a cartoonist. He worked for Punch, the Birmingham Evening Mail, Private Eye, the Oldie, The Guardian and the Daily Telegraph. ‘Larry’ illustrated many books as well as publishing several popular collections of his cartoons, including Larry on Art and Larry’s Art Collection. He was awarded an honorary degree by what was then known as Birmingham Polytechnic in 1991.

This collection contains original cartoons by Larry on the subject of art, art galleries and the School of Art building at Margaret Street. Many of the cartoons are parodies of famous paintings such as Joseph William Mallard Turner’s The Burning of the Houses of Lords and Commons, 16th October 1834 (1834-35); Rene Magritte’s The Great War (1964); Millais’s The Gleaners (1857); Roy Lichtenstein’s Wham (1963); Claude Monet’s The Beach at Trouville (1870) and Vincent Van Gough’s Gauguin’s Chair (1888).

Several others, while not based on a particular work, parody the work of Auguste Rodin, George Stubbs and Canaletto. The collection includes references to three well-known Pre-Raphaelite works in Birmingham Museum and Art Gallery, namely John Everett Millais’s Christ in the House of his Parents (1849-50) and The Blind Girl (1856); and Ford Maddox Brown’s The Pretty (1851-59).