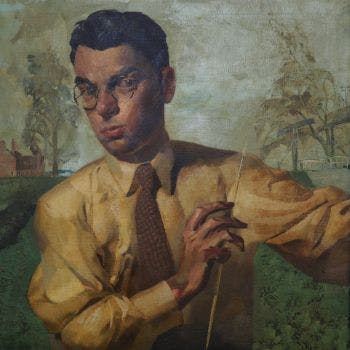 Frank Hodgson (b.1912) started as a student at the Birmingham School of Art in 1929 at the age of just 17. He studied drawing and painting for four years and became a part-time teacher of Drawing at the School in 1933.

At first, he taught mainly on the evening courses - his specific area of interest and skill being anatomy and life drawing. In October 1938, he was made a full-time member of staff and took on responsibility as Deputy Head of the Evening School, a post that he went on to hold for over 30 years.

This collection mostly contains files and papers produced by Frank Hodgson in his capacity as a teacher at the Birmingham College of Arts and Crafts. These include lecture notes, bibliographies, illustration lists, references and chronological charts covering all aspects of art and design history from Roman and Greek times up to the modern 20th century movements of the Bauhaus and Art Nouveau that are of potential use to researchers investigating the teaching of art history in the 1960s and early 1970s.

However, the majority of his research focused on the mid to late 19th century and, most specifically, on the Arts and Crafts Movement and the stained glass work of William Morris and Sir Edward Burne-Jones. The collection also includes three sets of prints of historical costume, decorative arts and patterns that Hodgson produced as teaching aids.