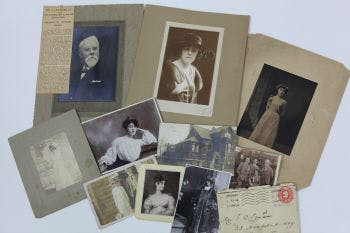 Gertrude Ann Lymn (née Bowater) was born in West Bromwich in 1880. Her link with Birmingham School of Art is unclear as she does not appear in the admissions records for the Central School during the period 1895 to 1903 when her art certificates were awarded.

Pictured right: Selection of photographs and correspondence from the Bowater collection, 1895-1940

The donor of this collection, her daughter Barbara Murdoch, said that she might have studied at one of Birmingham School of Art’s many branch schools. Gertrude married Arthur Henry Lymn between 1903 and 1906. The couple moved to London, where she exhibited a portrait miniature of her four-year-old daughter Molly at the Royal Academy Summer Exhibition in 1914. Although not a professional artist, she remained an enthusiastic amateur with a particular interest in creating flower paintings and portraits for her own home.

This collection focuses on the history of the Bowater family (most especially in West Bromwich in the late nineteenth century) and the artistic development of their daughter Gertrude Ann from the age of six in 1886 until the early 1940s. It is divided into two series: one detailing Gertrude Ann Bowater’s family history and the second her artistic development. The first series includes family photographs; notes and correspondence about family history. Some of the items have been annotated by her daughter to provide context. The creators of the material in this series are other members of the Bowater family, including Gertrude’s parents and her brother Norman.

The material in the second series (with the exception of a handwritten list of paintings clearly made after her death in 1952) was collected by Gertrude during the course of her lifetime. It includes Gertrude’s artworks, examination certificates and notebooks on art; postcards from national museums that she copied paintings from; and ephemera including gallery passes and an application form to be used when submitting paintings for exhibition at the Royal Academy.