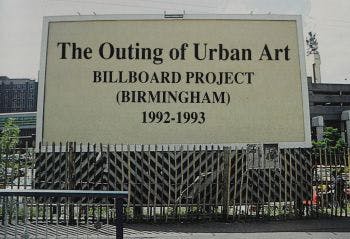 This collection documents an art project organised by Graham Fagen, who was a member of staff in the Department of Art at Birmingham Institute of Art and Design (now subsumed within the Faculty of the Arts, Design and Media) from 1991 to 1995.

Born in Glasgow, he studied Fine Art at Glasgow School of Art and completed an MA in Art, Architecture and Cultural Theory at the Kent Institute of Art and Design.

When he arrived in Birmingham in 1991, he expected to find an artistic vibrancy in the city similar to that in his hometown of Glasgow. His disappointment at not finding this influenced him to conduct a research project into possible ways in which to interact and add culture through visual communication media. He worked in collaboration with 12 artists and Vision, a Birmingham-based independent outdoor contractor. Each artist was invited to design a billboard poster that would be displayed for one month. The choice of billboard posters as a medium allowed the works to be displayed outside the more traditional confinement of a gallery and created the opportunity for the works to be viewed by a wider and more diverse public audience.

From May 1992 through to May 1993 twelve billboards created by artists were exhibited on a chosen location in Snowhill Queensway, Birmingham. The project also formed the subject of an exhibition at the Bond Gallery, Birmingham in 1993. The collection comprises of 12 framed prints of the posters and multiple copies of the publication accompanying the project, The Outing of Urban Art, Billboard Project (Birmingham) 1992-1993.

The 12 artists featured are: