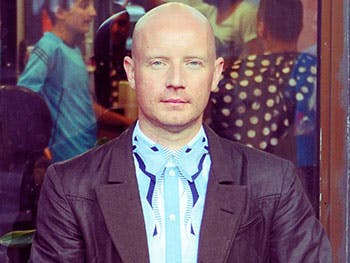 One of the country’s leading creative experts, Lee Lapthorne, is to be honoured as Birmingham City University’s Alumni of the Year.

Lee graduated with an MA in Textiles from Birmingham City University in 1998 and has since achieved global success as a textiles artist, accessories designer, curator, show director and mentor.

Born in Sutton Coldfield, Lee set up creative events agency Doll while studying for his MA and has worked for clients including Gucci, ITV, John Lewis and Vogue Italia.

Described by Design Week as one of the country’s hottest creative talents, Lee’s first collection of fashion accessories debuted at Harvey Nichols in London before being sold internationally and have been worn by A-listers including Paloma Faith, Fearne Cotton and Jessie J.

“I was absolutely thrilled and very excited upon finding out that I have been named as Alumni of the Year”, said Lee.

I loved my studies which gave me the freedom to explore new ways of working. The University taught me to push the boundaries of my work and come up with solutions to problems. Most people tended to graduate as a textile designer, or a graphic designer, or a photographer, and I could say I was all of these.

Lee will receive his award on Wednesday 11 January at a ceremony celebrating students graduating from Birmingham City University’s Faculty of Arts, Design and Media.