Student’s artwork takes off for India 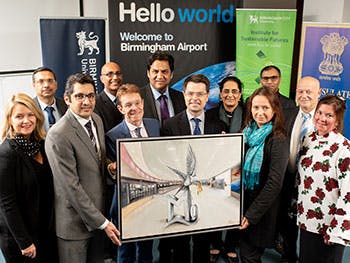 A student at Birmingham City University has presented the Secretary of State for Housing, Communities and Local Government, and the Mayor of the West Midlands with an award-winning piece of art that will be hand-delivered to the Indian Government as part of the first ever Midlands trade delegation to the Asian country.

The Secretary of State and Mayor are co-leading the mission of SMEs from the Midlands as they seek to further deepen trade links between the UK region and India.

The artwork presentation follows a competition set by Birmingham City University and the world’s largest producer of high-pressure die cast magnesium components, Meridian Lightweight Technologies (MLTUK) earlier this year. They challenged students to create an interdisciplinary art installation from magnesium that would showcase the potential uses of the metal within the transport and aerospace sectors as part of wider education and research initiatives aimed at promoting the benefits of the material.

Consortium partners from Birmingham City University, MLTUK, Birmingham City Council and the Consulate General of India in Birmingham spoke with the Secretary of State and Mayor at the airport ceremony to discuss the various magnesium-related projects they are collaborating on, which span the fields of engineering, creative arts and social sciences.

“It’s a real pleasure to take this painting to the Indian Government, representing our region’s engineering and research strengths, but also showcasing a great artistic talent.” 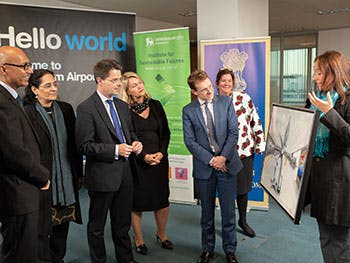 “We are indeed excited about this project and wish it all the success.”

As well as being presented to Suresh Prabhu, Minister of Civil Aviation during the mission to India, Anna’s winning concept will be realised as a sand cast magnesium sculpture next year. It will go on display at Birmingham Airport, where it will be seen by more than 13 million passengers who use the airport every year.

It is hoped that Birmingham can connect with other global cities by displaying similar sculptures in other airports around the world, including New Delhi. Furthermore, Anna’s winning design will be showcased to experts at the International Magnesium Association (MIA), who are also consortium partners.

However, misconceptions surrounding the element’s properties have seen a historical aversion to designing products with magnesium when compared to less sustainable and heavier metals. This is despite a long-standing ban being recently lifted for the use of high pressure magnesium die casting in aircraft seat construction. 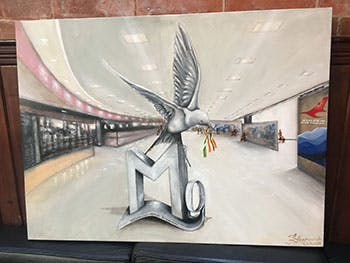 Professor Hanifa Shah, Pro-Vice Chancellor and Executive Dean of the Faculty of Computing, Engineering and The Build Environment was also present at the Birmingham Airport ceremony and said:

“Our research into the benefits of magnesium with partners around the world is going from strength to strength, and I am delighted that, with Anna Kryzhanovska’s artwork, our efforts will be brought to the attention of the Indian Government as part of the first ever Midlands trade delegation to the country.

The competition to design the magnesium sculpture gave our students valuable exposure as they seek to forge their own careers in engineering and the arts, while it also reinforces our mission to develop sustainable solutions to problems facing society today.

Birmingham City University and MLTUK agreed a strategic partnership last year, which has seen the two organisations work together in the education, research and development of magnesium use. The partnership is placing fuel efficiency through weight savings and sustainability at its core, and their second annual Magnesium Symposium will be held later this month on the University’s City Centre Campus in Birmingham.