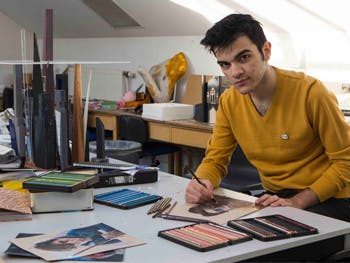 A social media star from Turkey, famous for his colourful portraits of some of the world’s biggest celebrities, has been sharing what it’s like to spend Christmas for the first time in the UK since moving for his studies at Birmingham City University International College (BCUIC).

Nineteen-year-old Emre Süner, known online as Mr Creative, has more than 85,000 followers on Instagram, his how-to-draw tutorial videos on YouTube have been streamed hundreds of thousands of times and the artist counts popstar Rihanna among his fans. Furthermore, an abstract picture he drew of musician Taylor Swift went truly viral in 2015 when it was shared by her friend and actress Sarah Hyland and model Dominic Sherwood – who appeared in Swift’s ‘Style’ video – on Twitter.

Born and raised in the small southern Turkish city of Antakya, Emre moved with his family to live in Doha, Qatar in 2009, where he first discovered his talent for art. Earlier this year, Emre moved to the UK to study an Undergraduate Pathway in Architecture before he plans to embark on a degree in Architecture at Birmingham City University. 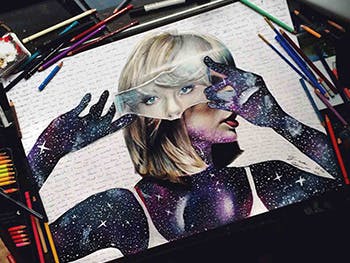 “I know I come from a warm country and my family now live in the Middle East, but I really love the cold! The festive period is always a special time of year no matter where you are in the world, but with the recent snowfall in the UK it has truly felt like Christmas here in Birmingham.

“I am really enjoying all the food that accompanies this time of year in the UK too! The BCUIC campus is situated in the beautiful Birmingham suburb of Bournville, right next to the world-famous Cadbury chocolate factory, so I am literally surrounded by sweet treats all day long.

“I’m certainly not getting homesick though, as the Christmas lights here in the UK are just as big and bold as the ones used to decorate Turkish homes at this time of year, and the displays in Birmingham remind me of my childhood and how we still celebrate New Year back home.

Being in the UK, it still feels like a dream. I am loving my life at Birmingham City University and, getting to explore the history and culture of the UK in my spare time, is really inspiring for my art.
Emre Süner

In order to keep his online fans in-the-loop, Emre has been documenting his first Christmas in Birmingham, along with his other offline adventures in the UK, on his YouTube channel.

Self-taught, Emre spent six months crafting his abilities before he first posted one of his pencil drawings – a human eye – online in 2011. Since then, he has developed a distinctive style which reflects his interest in popular culture, music and movies – with his art depicting stars such as Justin Timberlake, Cara Delevingne and Eddie Redmayne, or paying homage to films such as ‘Jurassic World’, ‘Interstellar’ and the ‘Star Wars’ saga.

“I think people enjoy my art because it reflects my personality as much as it showcases a skill. I take inspiration from pop culture and everyday experiences, so lots of people can relate to it, no matter where in the world they come from.

“There’s lots of hidden messages peppered throughout my work and I think people like to find the Easter eggs I’ve added as well and try to work out what they might mean.” Thinking about his plans for 2018, Emre wishes to continue his art alongside his academic studies and hopes in the future he gets the chance to collaborate with some of the artists he has drawn.

“I would love to design tour merchandise for someone like Justin Timberlake, but in the meantime, I will continue to draw, write and direct videos, as my creative outlets give me such joy personally and I am just blessed that others enjoy it so much too.

“As well as preparing me for a successful career, my studies at BCUIC are also helping me develop my skills and absorb new experiences, and I am truly grateful for all the exciting opportunities my life in Birmingham is providing me with.”