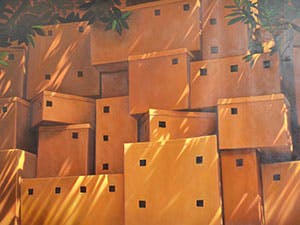 The suffering of Palestinian refugees “living life on the move” and of Israel’s “myth of nationhood” are at the centre of two major art installations in Manchester next week by Professor Bashir Makhoul, Pro Vice Chancellor of Birmingham City University.

Professor Makhoul’s The Genie features a village made from bullet strewn cardboard boxes suspended high above the ground, drawing on the fictional master-servant relationship of Aladdin.

The floating village of boxes, hung on wire from 30 metres high in a specially produced installation at the Asia Triennial Manchester 2014, represents the precarious existence of Palestinians forced by conflict out of their homes.

Elsewhere in the city, Professor Makhoul exhibits alongside U2 producer and artist Brian Eno with his work, House of Cards, featuring thick tapestries blown apart by gunfire.

Part of The Manchester Contemporary 2014 at the Old Granada Studios, House of Cards also sees Makhoul make a return to painting after 18 years, vividly depicting his own cardboard city installation at the 55th Venice Biennale exhibition in 2013. His paintings afford the same respect to the makeshift homes in which many Palestinians now live to that given by Canaletto to Venice in the 1700s.

Speaking ahead of the opening of The Genie at ATM14, launched to the media on 25 September, Professor Makhoul said: “This is a village precariously unfixed, no longer rooted to the earth, frozen in mid-float, and reminiscent of temporary encampments, displaced dwellings, and occupied territories.

“The shaky foundation evokes a host of other unstable foundations and edifices: regimes built on oppressive power, myths of nationhood and nativity, legitimations of control and occupation based on the magically combustive power of temporally-fixed yet imagined as infinite.

“It’s cheapness relates to the value ascribed to those who would dwell there while also offering the possibility for recycling and reconstituting.”

Also taking place in the Asia Triennial Manchester will be Harmonious Society; an exhibition curated by Birmingham City University’s Professor Jiehong (Joshua) Jiang. The contemporary Chinese art exhibition, the most significant in the UK to date, will be shedding light on China’s current socio-economic vision.