Understanding traditional Chinese arts to preserve them for the future 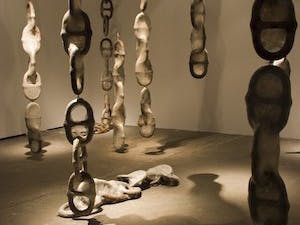 An international network of academics have launched a major research project which aims to better understand the decline in traditional Chinese arts and culture amid the country’s rapid economic growth.

The two-year project – titled ‘Everyday Legend: Reinventing Traditions in Chinese Contemporary Art’ – is being led by Professor Jiehong Jiang at Birmingham City University, and will also consider how these design and hand-making skills can be best preserved for future generations, alongside the role contemporary artists in China can play to facilitate this.

Shanghai-born Professor Jiang is a leading world figure in research on contemporary Chinese art and visual culture. In 2007, he set up the Centre for Chinese Visual Arts at Birmingham City University, which constructs a unique academic network with two leading art institutions in China – Central Academy of Fine Arts in Beijing (CAFA) and China Academy of Arts in Hangzhou and Shanghai (CAA), both of whom are partners within the new research project.

Joining them as part of ‘Everyday Legend’ is the Department for Chinese Studies at Leiden University for Area Studies in the Netherlands and both the Institute of Creative and Culture Entrepreneurship and the Asia Centre at Goldsmiths, University of London.

30 years of rapid urbanisation in China has meant that very few traditional constructions have survived, including many building and complexes built during the early years of the People’s Republic of China. This has led to the gradual transformation of an ‘internationalised’ style of living in China and numerous production techniques – such as textiles, ceramics, wood and stone carving – are declining or being substituted by batch production.

Since the 1980s, the pace of globalisation has posed a serious threat to the sustainability of tradition within Chinese arts and culture, as Western architecture, furniture, fashion and products have permeated Chinese cities. Furthermore, urbanisation and tourism has turned Chinese traditional arts and crafts from indigenous to commercial, as items are mass produced by machine for people all around the world.
Professor Jiang Jiehong

“Such popular reactions to these prevailing conditions in China today broadly represent the state of cultural anxiety that this project seeks to investigate and we hope that our findings can translate and reinvent Chinese traditions through interdisciplinary discussions and creative practices.”

The need for research within this area has emerged out of a curatorial research project by Professor Jiang ahead of a major contemporary art exhibition to be opened at Shanghai’s Minsheng Art Museum in November 2016. As a result of background research, Professor Jiang has uncovered a wealth of material and exposed the lack of critical debate regarding the subject through a series of in-depth conversation with traditional craftsmen, contemporary artists and scholars.

‘Everyday Legend’ will take an interdisciplinary approach to the subject beyond the fields of arts and crafts, and will be extended to and informed by the perspectives of anthropology, socio-politics, cultural policy and tourism.

As well as a publication scheduled for 2018, the research project will see a two-day symposium held in Shanghai next year, followed by a concluding conference in Birmingham the year after. These will be complemented by workshops in China, the Netherlands and the UK, as well as a research trip later this year that will meet with contemporary artists in Beijing, Hangzhou and Shanghai, as well as traditional crafts practitioners throughout the country.

‘Everyday Legend: Reinventing Traditions in Chinese Contemporary Art’ has been made possible due to a grant of nearly £100,000 from the Leverhulme Trust.