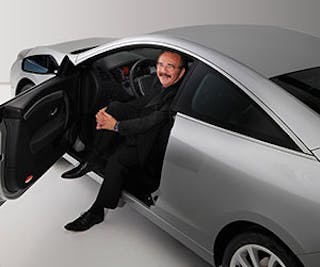 Leading automotive designer Patrick le Quément’s motto is ‘Design = Quality’, and it’s an approach that has defined the former chief designer at Renault’s career. A graduate in Product Design BA (Hons) at our Birmingham Institute of Art and Design, Patrick joined French car manufacturer Simca in 1966, before returning to England to work for Ford as a designer in 1968. His successes during this period include the Ford Cargo truck and the Ford Sierra in the early eighties.

After a spell in Detroit and a period working for the Volkswagen-Audi Group, Patrick was offered the position of Vice President, Corporate Design at Renault in 1987. He immediately introduced sweeping changes to the company’s design department, becoming the first automotive designer to report directly to a president of an automotive group.

Patrick’s leadership would result in a number of iconic models over the two decades, including the Clio, the Twingo, the Mégane, the Scénic, the Espace and the Laguna, and his designs have been instrumental in making Renault the leading international brand it is today.

Being a designer is not just filling a job, it's to do with attitude, it's an act of faith and a lifetime commitment, and I believe that my studying in Birmingham prepared me well for the life that I have lived,” he says.

Patrick was appointed Senior Vice President of Quality and Corporate Design at Renault in 1995, when he also joined the Renault Management Committee. He also became founder head of the Joint Design Policy Group formed by Renault-Nissan in 1999.

Patrick left the automotive industry in 2009, and set up his own consultancy, Patrick le Quément Consulting, in January 2010. “I wanted to get back to doing actual design work, after so many years of management,” he says.

A chance opportunity brought his first assignment in naval design – a 59 ft catamaran – and he has pursued this direction with great success. The catamaran and another vessel were both named European Boats of the Year 2013, and he is currently working on his 20th boat project.

He remains active in the automotive world as a design auditor to both Renault and Nissan, as well as being consulted in innovative management by high tech companies in Europe, China and India. He has also co-founded the Sustainable Design School, based in the Eco Valley in Nice, whose first academic year begins in October 2013, and will chair the school’s Advisory Board.

Patrick's designs have won many awards around the world, while he has personally received the Knight of the Ordre National de la Légion d'Honneur and the French Grand Prix National for Industrial Design.