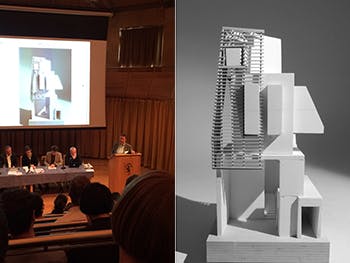 Professor Christian Frost of Birmingham School of Architecture and Design was an invited panellist on a one day conference in memory of his mentor Professor Dalibor Vesely at Emmanuel College Cambridge.

The event titled ‘The Cultural Significance of Architecture’ took place on Monday 11 April 2016 and included esteemed panelists from around the world.

Professor Frost presented his paper ‘Fragment, Material and Craft: A continuing tradition’, which included student, Alex Billingham’s, model from MArch Studio 3. The presentation showed how the work undertaken at Birmingham School of Architecture and Design is continuing to develop ideas Dalibor Vesely initiated in his teaching career at the Architectural Association School of Architecture and the University of Cambridge over a forty year period. Professor Christian Frost said:

It was a privilege to be invited to present at this conference in memory of my mentor Dalibor Vesely, and equally pleasing to be accompanied by design tutors from MArch Studio 3, Holly Galbraith and Shaun Young. Dalibor had a significant impact on my development as an architect as well as an academic and I was pleased to be able to present Birmingham’s own tribute to his legacy.

Among the 26 participants and the 150 guests were a distinguished set of practitioners, teachers and academics from across the world. This included Mohsen Mostafavi (GSD Harvard), David Leatherbarrow and Joseph Rykwert (University of Pennsylvania), Kenneth Frampton (Columbia University), Karsten Harries (Yale School of Architecture) and Mari Hvattum (The Oslo School of Architecture). The event included participants who submitted short papers relating to Dalibor Vesely’s influence on three key topics: ‘History and Philosophy of Architecture’, ‘Design and the European City’ and ‘Legacy, New Horizons’.

You can view the conference papers on the Dalibor Vesely memorial conference website and a film of the event will be available soon.

To keep up to date with all of the latest news and developments at Birmingham School of Architecture and Design, follow @BCU_BSoAD on Twitter and Instagram.