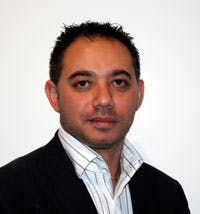 Birmingham City University has appointed Kevin Singh as Head of the School of Architecture.

In his new role, Kevin will lead the School’s move to a new home in a new purpose-built building in the City’s Eastside area, due for completion in 2014. He will manage a team of 19 academic staff, 27 visiting tutors and 450 students in the School, which delivers a breadth of disciplines across both undergraduate and postgraduate programmes in design-based and built environment disciplines including architecture, landscape architecture and urban design.

Kevin’s relationship with Birmingham City University began in 1988 when he joined the School of Architecture as a student. After qualifying he ran the BA (Hons) Interior Design course at what was UCE (now BCU) and simultaneously co-founded a design-led practice, the space* studio, in 2000 with an ex interior design student Tony Kerby. In 2003 he took the job as Course Director for the Part 2 course at Birmingham and since the departure of previous Head, Tom Jefferies, he has been Acting Deputy Head.

The School of Architecture has a developing research portfolio with particular strengths in sustainability, landscape and urbanism, and design methodologies. The School boasts a expert base of academic staff who provide consultancy and enterprise services to clients in industry and the public sector, including the President of the Royal Institute of British Architects.

Kevin said: “It is a great time to be leading the School of Architecture at Birmingham City University. Birmingham Institute of Art and Design is the largest art institution outside London. Our location and course portfolio allows us to tap into how our City is evolving. We also have fantastic links with local practices, often due to alumni relationships and I think these kind of relationships will be critical as architectural education is about to go through a very challenging period.”

Professor Chris O’Neil, Dean of Birmingham Institute of Art and Design, said: “I am delighted to have appointed such a committed academic manager to take Birmingham School of Architecture into an exciting new phase of its development. Kevin is a well connected and significant figure in the region, as well as having a national profile through RIBA, so is a real asset to the School. He will play an important role in the development of our plans for the School; which involve a series of new appointments, developing links with other Schools particularly in the International spectrum, and also taking advantage of its eventual new location, closer to Birmingham City Centre, which will provide many opportunities to enhance its academic profile and reputation.”

Kevin will take up the role of Head of School of Architecture from 1st April 2011.