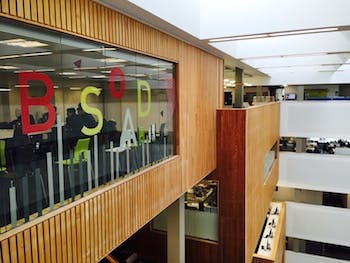 Conservation and research-based organisation The Milestone Society has announced its winner for the Terry Keegan Award for 2016 at Birmingham City University’s “state-of-the-art” Parkside Building.

The geology of stone

Andy Schoolar, Conservation Officer from Wakefield, received the accolade on Thursday 13 October for his work looking at the geology of stone and the causes and mechanisms of stone decay.

Andy produced a marvellous piece of work on the stone door surrounds to a former station in Wakefield, looking at the geology of the stone, the causes and mechanisms of stone decay as well as the possible palette of remediation. He also produced excellent reports on the conservation of terracotta and architectural ceramics, on lime and on building recording.

The award comprised an inscribed milestone, a cheque for £100 and a copy of Mervyn Benford’s Milestones book, along with a year’s membership to the Society. Jan Scrine from The Milestone Society said:

“We are delighted to welcome Andy to our fold, it gives me great pleasure to present the award to him.”

Milestones are classified as “listed buildings” by English Heritage. Unlike most other ‘listed buildings’, single milestones are not grand enough to be cherished by an individual; milestones and guide stoops are mostly owned by the Highways Authorities, often being destroyed within the landscape through roads widening, collision damage, smashed by verge-cutters, stolen for sale or deliberately vandalised.

The memorial award was introduced in 2013 in the name of the late founder of the Society, which grew to 500 members in five years from its establishment in 2001.

Terry gave talks and interviews, raised funds, restored milestones in Worcestershire, produced a county newsletter, and edited an early edition of the Society’s magazine ‘On the Ground’.

Each year the accolade recognises an outstanding postgraduate part-time student, who is likely to have found the time for heritage later in life, as have the majority of the Society’s members.

The very first recipient of the award was Fiona Deaton, who has gone on to make a career in consultancy, with later winners including Bill Froggatt; now working for the Canal and River Trust which has secured funding for restoration of the Leeds-Liverpool Canal; and Catherine Kemp at the Heritage Lottery Fund.

To keep up to date with all of the latest news and information from Birmingham School of Architecture and Design, follow @BCU_BSoAD on Twitter and Instagram.