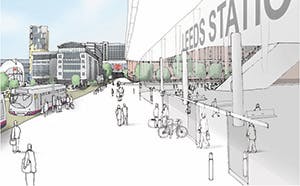 Architects, council leaders, engineers and environment specialists will be gathering at Birmingham City University this week to take part in a public debate on the future of High Speed II.

With an estimated completion date of 2033, HS2 is the Government's vision for a new high-speed rail network; from London to Birmingham and to Manchester and Leeds. Ministers have claimed that the new line will improve the transport network and boost the economy, but there has been controversy surrounding the route of the line and its effect on those living near it.

Formal Government consultations, for what is arguably the biggest transport project undertaken for a generation, is now fully underway - despite splitting the nation into pro or anti-HS2.

Birmingham City University will be hosting a panel-led debate, High Speed II – to be or not to be?, on Thursday 23 January at 6pm at The Parkside Building, allowing the public to hear both sides of the argument.

Chaired by BBC's Evan Davis, presenter of Radio 4's 'Today' programme, 'The Bottom Line' and 'Dragon's Den' and author of BBC Two's 'Made in Britain' – the debate promises to get to the bottom what the economic and infrastructure benefits of HS2 will be.

This year's annual 'West Midlands Great Debate' will be held at Birmingham City University, in association with RICS, RIBA, ICE, RTPI, RCEA and the Landscape Institute.

Book your free place for the event