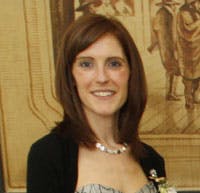 A Birmingham City University student is celebrating after winning a ‘highly commended’ award from the Association of Women in Property (WiP).

Lise-Ann Brennan, a third year student at Birmingham School of Architecture, was named as the leading Midlands property student in May and went on to the national final, held in London earlier this week.


Although Lise-Ann missed out on the first prize, she was acknowledged for her outstanding contribution to the Awards process, and was awarded the prestigious accolade of ‘Highly Commended.’


Monique Royle, National Chairman of the Association of Women in Property, said: "The calibre of the students this year has been very high and, although we only have one overall winner, they are all winners in our eyes. However it was a very close call and the judges chose to highlight Lise-Ann by awarding her the accolade of Highly Commended. We felt she was very polished, articulate, and mature and considered and clearly has a passion for Architecture. Congratulations to Lise-Ann from all of us at WiP."


Lise-Ann was delighted to win the commendation. She said: “It was a fantastic experience to be part of the 2011 Student Awards run by Women in Property, I am proud to have represented Birmingham City University in such a prestigious competition. The candidates I was competing against were all of an incredibly high standard and to have received a commendation from the judges was a real honour.”


The Association of Women in Property exists as a networking platform for women working in the property sector, with focus on professional growth, multi-disciplinary networking and business development. The student awards were initiated to highlight the need for the industry to engage with universities, widen the opportunities available for students, and to further the information students have of their career options.


Ruth Reed, Course Director, PG Dip in Architecture Practice, added: “This is the second time in as many years that the regional prize has been awarded to a Birmingham City University student. With Lise-Ann taking the prize this year and Anjna Farmah in 2009 it demonstrates the talent and communication skills of our students. Lise-Ann really wowed the judges with her research and confident presentation delivery.”


Birmingham School of Architecture celebrated its centenary in 2009 and has well-established links with the best local architectural, landscape architecture and urban design practices in the region. Its courses are fully validated by the Royal Institute of British Architects (RIBA) and the Landscape Institute. Superb teaching facilities and a focus on practical skills ensured 93% of its 2009 students were in employment or further study six months after graduation.


Birmingham City University is running a major awareness campaign in the Midlands to demonstrate how it is upgrading the future of individuals and companies.