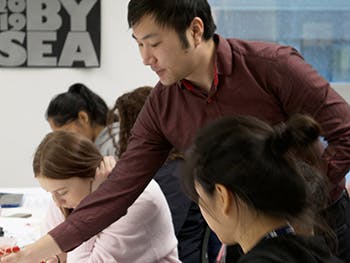 BA (Hons) Graphic Communication students were recently given the chance to broaden their type design knowledge at a bespoke workshop delivered by Toshi Omagari, a Senior Designer at Monotype.

Toshi has a focus on multilingual typography and has created fonts for several major brands including a fashion-led branding typeface for H&M, and a font for Sir Quentin Blake that borrowed on the illustrator’s own idiosyncratic handwriting.

He delivered the workshop on campus and covered several areas of type design including calligraphy, letter placement and spacing, as well as tips on how to recreate a typeface using a website called TypeCooker. Students were also able to hear more about Toshi’s career and his new book ‘Arcade Game Typography’, which celebrates the underappreciated world of arcade game typography.

BA (Hons) Graphic Communication student Freya Morris noted how enjoyable she found the calligraphy activity: “My favourite part about the day was learning how to do calligraphy as this is something very new to me. Toshi gave us tips such as putting two pencils together with an elastic band if you don’t have a flat nibbed pen and supervised us whilst we attempted to mimic the typographic letters.” 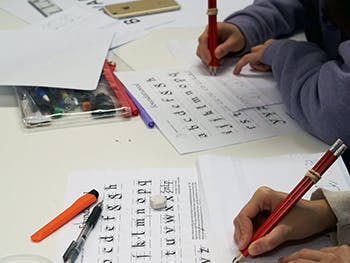 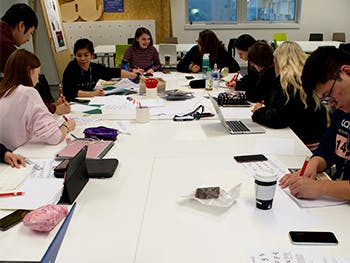 Toshi currently works for Monotype, a company specialises in digital typesetting and typeface design for use with consumer electronics devices. Monotype has a library of over 10,000 fonts, which includes some of the most famous and widely-used fonts, such as the Helvetica®, Univers® and Frutiger® typeface families, as well new and innovative fonts like Posterama and Masqualero.

BA (Hons) Graphic Communication student Emily Wakeling commented how Toshi’s passion for type and lettering engaged the class and why it was useful to learn from a member of industry:

The benefit of being taught by Toshi is that his career is in typeface design therefore he could offer us professional tips and demonstrations for our work.

The workshop was the second time Toshi has worked with students from the School of Visual Communication, having previously visited the University to deliver a Type Talk where he held another workshop for students beforehand.

To learn more about how students work with industry take a look at our course pages or join us for an Open Day.