For the project, students were invited to create a piece of work based around ‘the state of 2018’ to form an installation for the shop’s window. To do this, each student focused on a positive piece of news from the year and the resulting projects were based on subjects such as action taken to prevent plastic pollution in oceans, animals being taken off extinction lists and having belief in yourself and who you are. One student even created a bubble gum machine which dispensed positive tweets.

The entire project lasted around four weeks and culminated in a private view at Cow, which included retro drinks and music from Cow’s resident DJ. Students brought friends and family along to see their window installation work and celebrate the project. 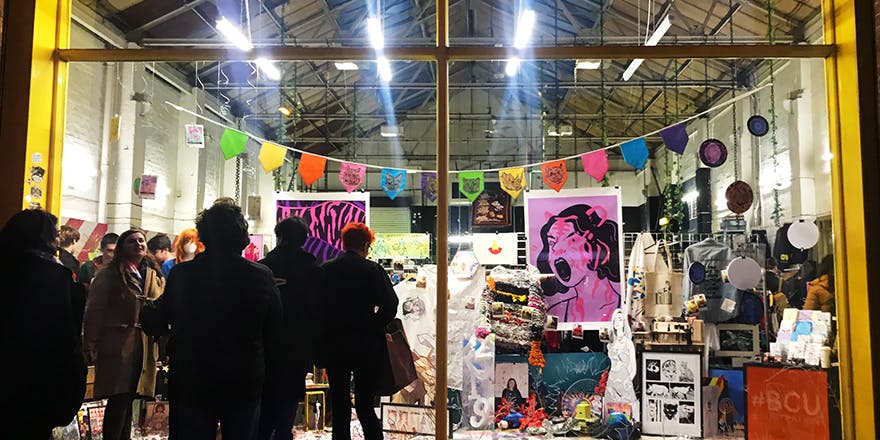 All of the work in the window received praise and positive reviews from the general public and one student, Tegan Kelly, even managed to sell the work she was exhibiting.

Can you tell us a little about your work and the inspiration behind it?

For the State of a nation project, I decided to focus my project on female empowerment as, in the last year, more people had been involving themselves around the topic of feminism.

With the #metoo movement as heavy inspiration for this topic, I decided to work with the idea of women becoming more confident in themselves, standing up for one another and proving stronger than ever.

Using the concept of women being “fierce” in 2018, I began to illustrate women with features similar to tigers, playing on the idea of fierceness.

For my final pieces, I created two large prints of digital illustrations focusing on these ideas, one of which, a woman shouting with a tiger drawn in the same stance as her, projecting this theme of strength among women through the appearance of confidence in this character.

How did it feel to have someone buy your work?

Initially I was very shocked, especially to find that the buyer was a fellow artist themselves. I had not yet sold my work, and so with this shock came great excitement.

Why is it useful to be able to exhibit your work in the city?

Being brought up around Birmingham, I have often overlooked how the city itself thrives with artwork. Yet, from my time spent so far at BCU, I’ve only come to appreciate the city more and how it can provide for creators.

Taking part in this project I have become more aware of how it can give you such great visibility, how accepting the people of the city can be and how they can appreciate and encourage your work.

We each have our own opinions on what is “good art”, yet with it being so visible in the city, there are many who welcome all types of art. There is always someone to show interest, and find influence in your work, and the city truly does provide for all kinds of artists who find links within it.

'Break the Confinement' with postgraduate study

Photography students get to work on live brief with Warwickshire Count...