Making Sense of Coercive Control: The Rebirth of Meadow Rain

In my last blog, ‘Raising Awareness of Coercive Control’, I wrote about David Challen who was campaigning to have his mother, Sally Challen’s, murder conviction overturned.

In 2010 Sally murdered her husband of 31 years, Richard Challen, and was sentenced to 18 years in prison. Central to David’s campaign was how his mother had been in a coercively controlled relationship* from the age of 15 up until the age of 56. He described this as a lifelong campaign of psychological abuse, which led to her temporary loss of control and the subsequent murder of his father.

On the 7th June 2019, after a relentless campaign by David, his brother James and feminist campaigning organisation Justice for Women, Sally Challen’s conviction was quashed on the grounds that she was suffering from "an abnormality of the mind that substantially impaired her mental responsibility” as a result of four decades of coercive control by her husband. The plea of manslaughter was accepted by the prosecution, meaning she had already served her sentence and was subsequently released from prison. 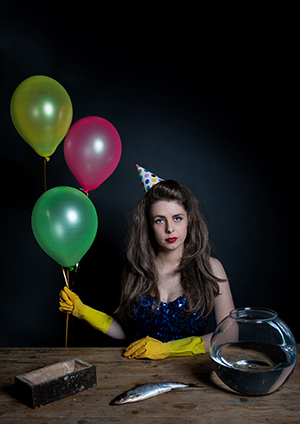 Since I wrote the original blog piece Hannah Moss, Artistic Director of the award winning theatre company ‘On the Run’, reached out to me asking if I could contribute towards the production of her new play, The Rebirth of Meadow Rain, by providing my own insight around the issue of coercive control.

The show is a dark and comic tale which explores themes of coercive control. We follow Meadow Rain as she endeavours to reconnect with her closest friend after leaving an abusive relationship.

Through flashbacks, audience participation and movement, the show unpicks abuse that is non-violent, highlighting the manipulation, isolation and turmoil a victim experiences.

The show also explores the effect of abuse on a victim's wider community and the supportive role of friends and family. This visceral piece seeks to change perceptions of what coercive control is and what a victim can look like.

Coercive and/or controlling behaviour within intimate or familial relationships became a criminal offence in December 2015, by the end of 2016 there had been just 27 convictions with only 24 sentences of immediate custody - none of which were for the 5-year maximum term as permitted within the legislation (Barlow et al. 2019). By March 2017, there had been 4,246 crimes of coercive or controlling behaviours recorded for all of England and Wales but prosecutions and convictions have remained consistently low (ONS 2017, 2018; Barlow et al. 2019). However, when considered in relation to the national figures of domestic abuse, there were a total of 1,198,094 incidents and crimes recorded by the police in England and Wales in the year ending March 2018 (ONS 2018:15), offences of coercive control are small in number. Barlow et al. (2019) suggest that given the contemporary nature of this legislation, that this is not surprising.

The new legislation has been viewed by some as a positive step forward as it recognises the everyday reality of abuse for many victim-survivors. However, much more work is needed to improve awareness and understanding of this type of crime. For me, one of the key reasons as to why this is so important is because the presence of coercive control is nine times more effective as a predictor of intimate partner homicide than physical violence (Stark 2007). We need to find different ways to educate people and provide alternative platforms to disseminate this knowledge, the Rebirth of Meadow Rain provides just that opportunity.

On Friday 12th July, I have been invited to watch an Edinburgh Festival preview of the play in London, followed by a Q&A where I will be joined by Hestia, an organisation that supports adults and children in crisis across London. They are are currently leading the campaign, UK Says No More to unite and strengthen a diverse community of members of the public and organisations nationwide to actively take a stand against domestic abuse and sexual violence.

Details of the London performances and Edinburgh Fringe Festival are available here.

* "A person (A) commits an offence [of coercive control] if—

Attacking a Giant: The lessons of Pearl Harbour