Domestic abuse must stop being treated as the 'poor relation' by our criminal justice system, argues criminology professor 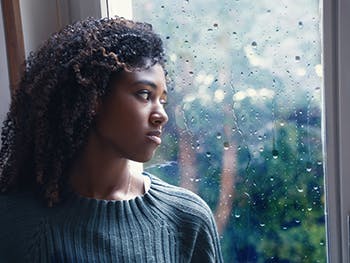 The data highlighted today, that nearly 13,000 cases have been dropped in the last five years, highlights to me that there is a problem with the way our criminal justice system recognises and responds to domestic abuse.
The fact that so many cases are being dropped because the timer runs out suggests to me that there are two main issues. Firstly, these cases are not seen as a priority. Secondly, our criminal justice system is not set up to respond to harms like domestic abuse, which are about ‘courses of conduct’ rather than single incidents.
Domestic abuse has always been the ‘poor relation’ in terms of criminal justice, and that’s clearly continuing. Domestic abuse has always had a low status, it's not seen as an important or urgent issue to address.

Unfortunately, despite the progress that’s been made by the feminist movement and campaigns to tackle violence against women and girls, there are still huge misunderstandings about domestic abuse. Women are still held responsible for their own victimization, we’re still asking ‘Why doesn’t she just leave?’ rather than ‘Why doesn’t he just stop abusing her?’. We’ve recently seen a series of stories highlighting institutional misogyny within policing in particular, and this is a huge part of the problem. If violence against women and girls is being investigated by police forces within which sexist, discriminatory values and beliefs proliferate, this will translate into a ‘less bothered’ attitude when it comes to these investigations.
Our criminal justice system still works very much on an ‘incident-based’ model, dealing with single occurrences of criminal behaviour. However, domestic abuse is about a course of conduct, a pattern of behaviour, in which individual incidents must be seen as a campaign of control and coercion against a victim. Certainly, common assault is an example of a behaviour that constitutes part of domestic abuse, but one incident of common assault will sit alongside other acts and examples of coercively controlling behaviour.
We are still fixated on the ‘violence model’ – the idea that physical abuse which leaves a visible injury is higher in status than other forms of abuse that aren’t as ‘easy’ to evidence - isolation, control of someone’s finances, psychological manipulation, gaslighting. When the Crown Prosecution Service makes decisions around charging, they will look at the strength of the evidence available and the likelihood of securing a conviction. All too often, these decisions are based on what they believe a jury will conclude – and as juries represent society at large, they will have been influenced by the violence model and the myths and stereotypes around domestic abuse.
When victims report their abuse to the police, the incident that’s occurred is often the tip of an iceberg. They will have suffered for many months or years. It won’t be a one-off. It’s important that when victims do come forward, police are adequately resourced and trained to look at the bigger picture, to identify other harms that have been committed against them. However, as police forces do not compel their officers to undergo training in domestic abuse, they won’t know what to look for. That is why the coercive control laws are so woefully under-utilised. The law against coercive control came into force in 2015 and is set up to recognise and respond to abusive courses of conduct consisting of multiple behaviours, including but not limited to physical assaults.