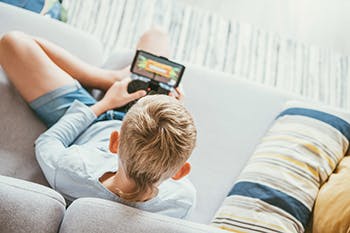 Mobile phones, PlayStations and British weather are among the major reasons British children are falling short of the recommended amount of sports and exercise, new research has revealed.

A study from academics at Birmingham City University and Newman University identified that technology, cost and poor weather are among the biggest barriers to childhood physical activity, with only 52 per cent of nine to 13-year-olds meeting recommended physical activity guidelines.

The study, which was published in the Journal of Sports special issue Physical Activity for Health in Youth, monitored 60 children from a West Midlands school for four consecutive days.

It showed that technology such as mobiles phones, tablet computers and consoles often kept children staying indoors and that the cost of club fees and purchasing sporting equipment left many unable to participate.

Of the students meeting the daily physical activity guidelines, 58 per cent of children were aged nine to 11 years and spent significantly more time outside than those aged 11 to 13.

Children were aware of the negative impact technology had on physical activity. One participant said: “When you’ve got a phone or a console, you don’t think as much about getting active, you just want to play on them.”

They also acknowledged the need to reduce time spent on technological devices, with one child suggesting: “You could reduce your time down on a tablet or computer so you’re not always on it.”

Focus groups revealed that physical activity was associated with fun, enjoyment and socialising with friends and family.

However, children also reported that there were barriers to getting active. These included financial costs of physical activity such as equipment and sports club fees, as well as a lack of variety on offer, poor weather and poor food and nutrition.

Findings highlight the need for schools to offer varied physical activity programmes to suit all abilities and aim to meet a wide range of preferences whilst minimising the financial cost for children to participate.

The research was carried out by Irfan Khawaja of Birmingham City University’s Faculty of Health, Education and Life Sciences as part of a wider PhD study with Newman University. The study was co-authored by supervising Newman and Wolverhampton University academics.

With childhood obesity at its current levels and the well documented health and wellbeing benefits of getting active, it’s vital that we make physical activity accessible to all school children, regardless of their background or circumstances.
Irfan Khawaja

“These findings identify a number of barriers to physical activity that schools can try to address. Schools could reassess the physical activities they offer and try to broaden what is available to cater to all abilities – perhaps forging links with local sports clubs to offer more varied sports.

“Schools could also consider measures such as providing shared equipment for children to use to reduce the financial costs associated with taking part in sport or physical activity.

“Whilst we can’t do much about the UK’s weather, we can consider how to support physical activity year round, for example making use of indoor spaces such as school halls for physical activity in poor weather.

“Physical activity at school has the potential to have a big impact on children’s health, wellbeing and ambitions. These findings give us a good indication of how we can encourage more children to be physically active.”

The full report is available to read online.

For more information about the University’s courses in sports coaching and physical education, please visit the institution’s website.