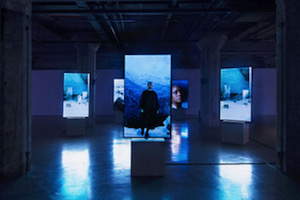 We travel - from one place to another, from the local to the world and beyond, and from the familiar to the uncharted. We travel - for life, for love, or, in a rather luxurious manner, simply for our own curiosity. We understand distance - physical space, short or long, that is created by our journeys; we can feel the distance of being away; and we believe that distance can somehow provide a sense of freedom or conversely anxiety, can build a particular aesthetic or generate a desire to be closer and more intimate.

The Distant Unknown encompasses the 'nearby' and the 'remote', geographically, astronomically, culturally and spiritually, the 'knowable' and the 'unknowable', and it points to an uncertainty with regard to the existence of things in and of themselves - the real and the imaginary. On one hand, this uncertainty arises out of an awareness regarding the limit of what we known or what we can comprehend. on the other hand, positively, 'the distant unknown' contains the power to valorise and to stimulate our curiosity, reaching to a world beyond our visual and perceptual observations, bodily experiences and intellectual understandings. I can become a reason for our ignorance, a rationale for incredulity, or a prompt for departure on a creative journey; and ultimately it can be extended as a reflection on the provisional nature of knowledge.

In our exhibition, artists re-examine the notion of 'distance' through a variety of perspectives, from the geographic to the intangible, from the reachable to the inaccessible, and from the existent to the imagined or fictional. Distance becomes the gap as well as possibility between two positions that, from one end to another, require a period of time to be connected; it appears as an interval in a story, during which one may reminisce about the past and imagine the future to come. It manifests a particular relationship that can be perceived physically, emotionally or spiritually, and, ultimately, activates an intellectual voyage from the known to the unknown.

See photographs from the exhibition