The Elizabeth Bryan Multiple Births Centre at BCU is an exciting new collaboration between Birmingham City University (BCU) and the Multiple Births Foundation (MBF), a charity of international repute. The new Centre’s name recognises the pioneering work of consultant paediatrician Dr Elizabeth Bryan, founder of the MBF and former President of the International Society for Twins Studies. It is jointly led by Jane Denton, Director of the MBF, and Dr Merryl Harvey, Professor in Nursing at BCU.

Why are multiple births important?

In England and Wales, the rates of multiple birth have increased over the last 40 years from 10 per 1,000 live births in 1980 to 15.9 per 1,000 in 2016 (Office for National Statistics, 2017). The increased incidence of multiple births is attributed to the increased birth rate, increased maternal age, advances in assisted conception and the development of obstetric, midwifery and neonatal practice which has enabled more multiples to survive (NICE, 2011; Twin and Multiple Birth Association [Tamba], 2013; Human Fertilisation and Embryology Authority, 2015).

Multiple pregnancies account for higher and, disproportionate numbers, of stillbirths and neonatal deaths in the UK (ONS, 2016; Montacute and Bunn, 2016). Over 50 per cent of twins and almost all triplets are born before 37 weeks gestation and these account for approximately 15 to 20 per cent of all admissions to neonatal units (Royal College of Obstetrics and Gynaecology, 2011).

The early parenting role is critical and, for parents of multiples, the priorities and challenges are multiplied (Tamba, 2009). It is widely acknowledged that the outcomes for multiple birth families are poorer compared with singletons (Blondel and Kaminski, 2002; McKay, 2010; Wenze, Battle and Tezanos, 2015).*

*Referencing information can be found on our Vision and Aims page.

We are delighted to share our latest newsletter with you. We hope you enjoy reading about the ongoing work of the Elizabeth Bryan Multiple Births Centre.

Here are some funding opportunities and bursaries available for for Health Visitors for our multiple births online module.

Our multiple realities photography exhibition in collaboration with the School of Visual Communication will be taking place at the Library of Birmingham throughout September 2019. Download our flyer for more information. 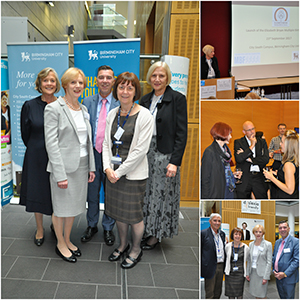 The Elizabeth Bryan Multiple Births Centre was launched at Birmingham City University on Thursday 21st September. The event was attended by members of Elizabeth Bryan’s family, Trustees of the Multiple Births Foundation, BCU staff and representatives from practice partners and local and national organisations. The programme consisted of short presentations (see below) followed by a video clip from BCU’s Chancellor, Sir Lenny Henry offering his support to the work of the EBMBC. The event ended with refreshments and the opportunity for attendees to network.

Who was Elizabeth Bryan?

Looking to the future