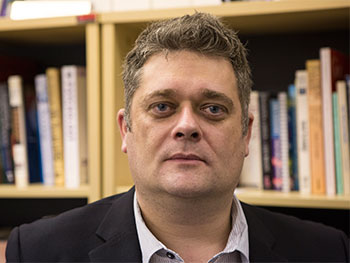 The author of a newly published crime thriller has revealed how a professor at Birmingham City University was a key inspiration for his book.

Andy Griffee, author of Canal Pushers, says the book might never have been written had he not been inspired by hearing about psychologist, Professor Craig Jackson. Canal Pushers was published in May and features a former journalist and his partner fleeing from the attentions of a serial killer who is stalking canal towpaths. Mr Griffee says his story was inspired by newspaper coverage which speculated that a similar serial killer was at large on the waterways of Greater Manchester.

"I transferred the idea and the action from Manchester to Birmingham and the West Midlands," he explains. "But it is very much a work of fiction as, to date, there is no substantive proof that any of the deaths in Manchester were connected."

Mr Griffee was working as a journalist and senior manager at the BBC when he read the original story about the drownings. It featured in a Sunday newspaper during 2015 and followed a reporter's Freedom of Information request into the number of unexplained deaths in Manchester's deep canals.

There have been numerous deaths across the Greater Manchester canal network over the past ten years and 10 have resulted in open verdicts where the cause of death was unexplained.

At the time Professor Jackson suggested more investigations around the deaths were necessary to rule out a connection between them, although he accepted that they occurred across the Greater Manchester Canal network so would most likely have not been connected. He also met representatives of Greater Manchester Police at the time and has not commented further since then.

"Some saw the coverage as alarmist and upsetting," explains Mr Griffee. "But unless someone actually witnesses a crime or crimes, it is hard to completely rule out the idea of a killer. This is what made it so fascinating to me as the central idea of a crime thriller."

Two years ago, the speculation resurfaced when a 34-year-old cyclist was pushed into the Bridgewater Canal in Manchester and then temporarily prevented from climbing out. He survived to tell his tale. A number of people have also been jailed for causing deaths by drowning after attempted muggings.

The new thriller, which is published by Orphans Publishing Ltd, tells the story of a newly divorced and penniless ex-journalist called Jack Johnson who hires a narrowboat with a view to buying it and living on board. He befriends a homeless young man who is then found drowned in the canal near Stratford-upon-Avon. At the inquest, he meets a criminal psychologist who describes his suspicions that a serial killer may be at large. A cat and mouse chase then takes place with the novel's hero and his friend Nina being chased across the Midlands canal network by the media, a professional drugs gang and a lone serial killer. The action moves from Stratford through Birmingham and on to a climactic end in Worcester.

"Of course, everyone in the book is fictional," says Mr Griffee. "But I couldn't resist incorporating a criminal psychologist from Manchester. Professor Jackson was also good enough to read an early proof of the novel and give it his blessing."

"I wish Andy and his novel well," said Professor Jackson.

It's a great piece of crime fiction based on an intriguing story..
Professor Craig Jackson

"I was very happy to be consulted by him and wish him every success."

Canal Pushers in the first in a series of books called the Jumping Jack Flash thrillers and its sequel will be called River Rats and follows Jack Johnson and Nina onto the River Avon at Bath. It will be published this November.

Andy Griffee will be in conversation with Anita Bhalla OBE about his book , crime fiction in general and his career which included a spell as head of the BBC in Birmingham, at Birmingham Waterstones on 26th June at 6pm. Tickets can be booked via https://www.waterstones.com/events/an-evening-with-andy-griffee-and-anita-bhalla/birmingham .