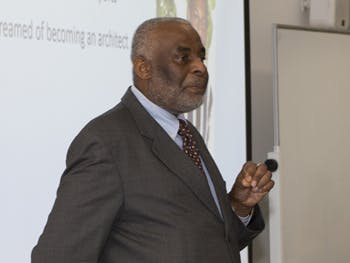 The father of murdered teenager Stephen Lawrence has told students of the importance of justice, as his fight to bring his son’s killers to account enters a 24th year.

Neville Lawrence, whose son was tragically killed in a racially motivated attack in 1993, was at Birmingham City University to talk about the crime and its impact on his life, as part of a unique Criminology module focussing on the wide reaching impact of the case.

The new module, Contemporary Investigations: The Stephen Lawrence Case, examines the murder, how Police investigated the crime, the media’s role in the investigation, issues of racism and institutional denial.

The high-profile crime has influenced British views on race which continue today with the Black Lives Matter movement, exposed the role of undercover police officers on the case and posed questions about how investigations are carried out.

Mr Lawrence’s campaign for justice is still ongoing with two of the killers eventually jailed in 2012 but up to five still believed to be walking free.

The module was drawn up by Emma Kelly, Criminology Programme Director at Birmingham City University, and renowned investigative journalist Donal Macintyre who is a visiting professor at the University and reported on the murder more than 20 years ago.

It could be that as this university course touches on the injustice that is now part of Stephen's story that the eyes of new generations of people will see the damage that is done when the law does not work properly.
Neville Lawrence

The module forms part of the Criminology, Policing and Investigation degree programme for third year students and will run for 12 weeks to provide real-world insight into the significant legacy left behind by crime, law and policing.

Neville Lawrence is the first in a series of guest speakers which also includes Dwayne Brooks, Stephen’s friend who witnessed the crime and Daily Mail editor Paul Dacre whose controversial front page splash proved pivotal to the investigation.

Donal Macintyre said: “As a journalist who reported and continues to report on this case it is clear to me, and to most, that this is a tragic landmark crime which reveals some of the most critical problems with our society and our justice system.

“I hope that this course will move the hearts and minds of students in their third year and enable them to become architects for positive change and justice as they prepare to enter the workplace in the years ahead. It is a unique learning opportunity for the students and I know that they are excited and enthused by the prospect the course offers over the next 12 weeks.”

Emma Kelly Programme Director for Criminology, Policing & Investigation and Security Studies, said: “This is an ideal opportunity to learn from the past mistakes and the continuing failures to bring justice and closure on the Stephen Lawrence case.

“Our students who are future criminologists and police officers must listen and learn from one of the most important cases in modern British history. As Programme Director I pride myself on modules like this in particular as they enable us, the teaching team, to approach learning in an 'applied' manner and bring the outside world into the lecture theatre or classroom."