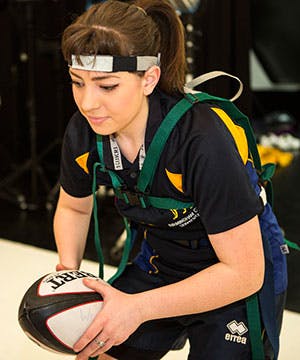 Researchers at Birmingham City University could hold the key to the future success for England's Six Nations Rugby team.

Academic Stephen Wanless and colleagues at the Faculty of Health have developed a 'Vibrating Suit', designed to give wearers feedback about movement, correct posture, and calculate the optimum position for elite athletes in a variety of sports.

The researchers believe it can aid rugby players who take part in the scrum – a crucial part of Rugby Union - after being recently tested on a group of university student rugby players.

Senior Researcher Stephen Wanless explains: "The device was originally designed for use in a healthcare setting but we soon realised the suit's potential in giving UK athletes a competitive advantage.

"The sensors include a vibrating motor, like that found on a mobile phone, and these can be set to vibrate to indicate when someone moves outside a desirable range, all designed to give feedback in real time that enables wearers to adjust their movements in performance.

"Biomechanical principles are very important when playing rugby. We can use the vibrating suit to track spinal cord position when a player is about to go into a scrum. If you move more than 30 degrees forward it lets you know you've gone over the optimum position and allows you to correct you position accordingly.

"When the scrum-half is putting the ball into a scrum and posture is incorrect it may lead to an illegal move which a player will receive a yellow card for. For a front row rugby player in a scrum posture is important for getting the momentum to be able to contest the scrum and be able to win back the ball.

"The vibrations of the suit will alert the player to change their posture and to adopt a much better position when playing".

Birmingham City University rugby player Georgia Shortland took part in the research, and can see the benefits to rugby players in using the Vibrating Suit in practice.

She said: "When you are about to pass the ball into the scrum, rugby players tend to be more pre-occupied with the players around them, and the position of the ball, rather than their own posture. This suit really helps you focus on attention to detail to get the position right to pass the ball correctly. It also made me aware of my own posture which is very important in the game."

Stephen Wanless added: "We've utilised the vibrating suit in other sports including rhythmic gymnastics, dressage and volleyball so it clearly has the potential to help all our elite athletes to achieve more sporting success for Britain in the future."