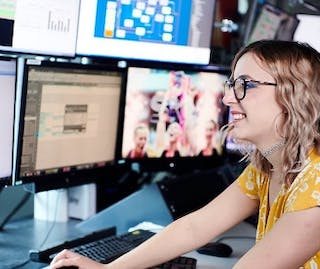 Stefi Popescu is a Systems Engineer for Sky, having worked her way up at the company during the six years since graduation.

What was your first job after graduating?

I graduated with a BA in Media and Communication, specialising in television. My first role after graduating was as a Media Operator at Sky.

Was it difficult to find that job?

The job opportunity came up as a result of the work placement I attended at Sky in my third year of university.

What research and preparation did you do to help get that job?

The work placement was immensely helpful in meeting people from the industry and getting some hands-on experience. I wasn’t offered a place on the scheme on my first try, but I kept doing my research about the company, kept being involved in any work experience opportunity available and reapplied, and was then successful. If I’m honest, I didn’t know that much about the role I was applying for, but what helped me was the desire to just learn, perseverance and honesty about that, which paid off.

What did the job involve?

The job title was a bit vague and ended up being something different from what I expected or from what I imagined it to be, but the universe works in mysterious ways and it took a different turn for me. A good one! My first job, Media Operator, involved a manual process of uploading any piece of content that would go on the Now TV and Sky Go platforms, followed by troubleshooting in case an episode was playing out the wrong content on the platform, for example. We had to liaise with different teams to provide us with that content, make sure we process it on time and that we fix or keep track of any issues until resolution.

How did University prepare you for work?

I loved how BCU approached the teaching of both theoretical and practical skills, which have proved very beneficial in my career so far. The facilities (the TV studio, the edit suites) being of industry standard, the encouragement of group work, and work experience were all very important factors in building up the skills needed for the real world, and for building confidence.

Looking back, what was the most useful module as far as your career is concerned?

I really enjoyed the Television modules. Being taught how to use different types of studio/gallery equipment was fascinating for me and it made me want to dig a bit deeper on how the equipment works. Although in my current role I look after providing monitoring tools for first line support teams to be alerted of issues on the live Sky platforms, knowing the ins and outs of television production overall came in very handy when seeing how what I am doing fits in the bigger picture and helps connect the dots. Not that I am biased, but the television industry is a captivating industry with so much more to it than I imagined, so there is something for everyone, whether you work in production or a technical role. Despite going towards a technical route, studying television was the foundation of my knowledge base that started me off on my journey.

At what point, when you were a student, did you start thinking about your career?

I would probably say I started thinking more seriously about my career in my second year. First year was more about trying out different things and finding the modules that I enjoyed the most.

What training or further study did you need after University?

Personally, I only needed further training and studying because I moved into software development. I do however think that the skills learnt throughout university would have covered me in junior positions in the production world.

Is your career what you imagined it would be when you were at university?

No. I never thought I would end up in a technical role without having a technical background.

What other jobs have you done since graduating?

I have worked for Sky for the six years since graduating. My first role was a Media Operator. Then, as I started to be more interested in the technical aspects of television, I moved into a first line support role, and became a Platform Controller. While doing that, I attended a coding course in the evenings, which opened new doors for me into a software engineering graduate scheme. After a year as an associate, I got promoted to Systems Engineer and I have been in this role for almost two years now.

What advice would you give current students about preparing for work?

My advice would be to be flexible and realistic about your expectations. Maybe your first job is not what you thought it would be, or maybe it’s not that Producer role you always aspired to have, but that shouldn’t stop you from making the most of it. A lot more skills than I thought are very transferable, so you never know when you might need them. It can be harder to make a start, but once you’ve got your foot in the door, absorb as much information as you can and don’t overstress. I also think it’s important to not be afraid of how a job spec sounds; I am guilty of it myself. Don’t be afraid to step out of your comfort zone and apply for everything that you get energy from, whether you think you’re ready for it or not (be realistic, of course!). Every experience, either failed or successful, is a lesson that will come in handy at some point in your career. My last advice is, once on the job, don’t be afraid to ask questions even if you think they are stupid. Someone else probably wondered the same thing. I came across a lot of nice people that took time out of their busy jobs to teach me new things, just because I wasn’t shy to ask, and that knowledge has proved invaluable. People love talking about what they do, so don’t be shy.