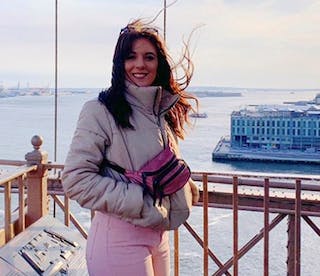 Ella Stone spoke to us about her current role as a Creative Producer at Global, Europe’s largest commercial radio company, and how her media degree helped prepare her for the position.

What does a typical day at your job involve?

A typical day in my role consists of making the ads for all Global owned radio stations across the nation! I’m in a team of eight who make the ads for Capital FM, Radio X, Heart FM, Smooth Radio the list goes on… so basically, I receive scripts in the morning and will ‘pick up’ ads that I will work on each day. A quiet day can mean 20 ads between the team (something that seemed so much work to me when I was at uni) and a busy day can be over 20 ads per producer! The most I have made in one day is currently at 24 which is quite the jump when I think back to my radio station module where I made 13 in a week! My day will involve casting voices, contacting writers, editing music, directing and editing voices and eventually producing ads! I’m also moving into animation, creating visuals for clients own social media accounts as well as branching into video and editing footage (I literally never stop).

What do you enjoy most about your job?

What I love most about my job is that I enjoy it so much and I feel so lucky to have a job where I look forward to going in on a Monday morning. It feels like fun rather than work and that’s the best. It was my dream job and I didn’t know whether to apply. It was actually the only job I applied for (thanks to my lecturer Sam Coley, who told me I could do it) so it was a long shot, but I got it!

Would you say your degree helped prepare you for your role and if so, how?

Massively. If I didn’t take Media at BCU I wouldn’t be in my job. This is because in my second year at uni I took a commercial production module and fell in love with it. I would never have even considered this without taking that module! I also learnt through my three years how to manage my time and workload for deadlines. Day to day I have a lot of deadlines to meet and a lot of people to communicate with and in my first year at uni I couldn’t do this at all. Like full stop. But by my third year I was managing projects which I could then could use in interviews.

Did you take part in any placements whilst studying and if so, could you tell me more about them please?

In order to do my course, we had to get experience in the industry. The industry is all about connections and who you know so I started early and got placements with Capital FM, Free Radio and Gem 106. These helped me gain contacts and have experience in live, running radio stations and it confirmed to me it was where I wanted to be.

What advice would you give to a student looking to get into the media industry?

Start making contacts as early as possible, learn as much as you can. Always be professional and get their name, they may come in useful for the future. For example, I went on the School of Media New York trip, and met producers from WNYC Radio (basically New York’s equivalent to the BBC). I then later contacted them to comment on my final year project, these are real people giving you real advice and it’s SO valuable! Start now!

What can a student thinking about joining the School of Media look forward to?

My course was so hands on. You learn as you go, and you don’t stop. They cram so much in and it’s so much fun. I’m a super practical person so I could select modules where I could be making things and it was such a blast. The lecturers are ace and even since leaving uni I still hear from them to see how I am getting on; the support doesn’t end when you graduate. Birmingham School of Media is a collaboration of like-minded people who come together to celebrate each other’s talents and learn from each other. It’s a great place to be.