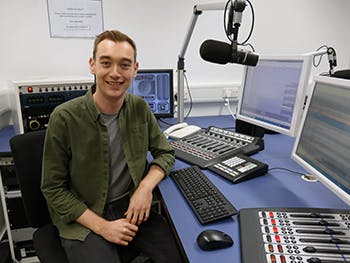 Ben Stones spoke to us about his time as a School of Media student and going on to work with BBC Radio 1, 1Xtra, Radio 2, 6 Music and Asian Network.

What course did you study at BCU and why did you choose to study here?

I studied BA Media & Communications on a broad-course specialism. After studying photography at A-level, and having an interest in web design, I felt that the broad-course would be a great way to get a feel for a variety of areas and then specialise in whatever I was most interested in. That was really something I hadn’t found at any other uni that I’d been to see - everywhere else felt like you had to pick an area of the media and stick with it from start to finish. Having always been an avid radio listener I knew that I wanted to give it a go, but never thought it would be a possible career path. But as soon as I got my hands on a radio studio in first year I knew that it was for me and the broad-course allowed me pursue that further.

What were your highlights of the course?

I spent a lot of my time at uni working on Scratch Radio, the student station of BCUSU. Whilst not part of the course, that was absolutely the highlight of my time at uni. We were all massively ambitious and wanted to make the station as good as possible. That meant that I got to try my hand at all the roles that I would never get chance to do in the real world - from presenting to rebuilding the studio by hand, to planning a schedule and running outside broadcasts. It didn’t matter if we failed, and we often did, but we tried everything we could possibly think of. The final year radio station module was also particular highlight - at its simplest, you come up with an idea for a radio station and make it happen. It was some of the most fun I had on the course, with a ton of creative freedom and the opportunity to work with friends on something we had all come up with together. It sounds like a cliche, but the people I met on the course were definitely another highlight. Even now I bump into fellow BCU Media graduates at work and we keep in touch. I’ve made some life-long friends from my time at university, and still keep in touch with fellow students and former lecturers.

What have you been up to since graduating?

Throughout my time on the course I was working in industry, something we were always encouraged to do. I was doing work experience and freelance work at both commercial and BBC radio stations; everything from promo work, handing out flyers and attending events for commercial stations in and around Birmingham, to working as Broadcast Assistant on programmes for BBC Local Radio. That meant that when I graduated I was fortunate enough to have some work lined up. I spent a year working on the breakfast show at BBC Radio Leicester, which was a really pivotal moment in my career, and then moved down to London to work as an Assistant Producer at BBC Radio 2 and 6 Music - and 5 years later, I’ve not left!

What does your current job involve?

Currently I’m a Station Sound Producer in a team working across BBC Radio 1, 1Xtra, Radio 2, 6 Music and Asian Network. That means that we create the audio branding for each station - essentially the bits between the songs that aren’t the presenters - as well as producing promos for programmes and events. Anything that sings “BBC Radio 2” or says “BBC Radio 1” will have gone through our team - and it’s something we’re all massively passionate about. Day to day, that means that I get to work closely with show teams from across all five stations to determine how their shows will sound, as well as producing lots of audio and generally having fun making exciting sounding stuff for millions of listeners each week.

How did it feel to win the silver award in the Best Station Sound Producer category at the Audio Production Awards?

It’s always great to be nominated for an award - for the work we do to be recognised alongside that of some really fantastic producers is really energising. We are really fortunate to be working on some massively exciting radio stations with a wealth of content and with truly talented presenters and producers, in Station Sound we get to tie all these exciting things together to make the overall sound of a station and to win the silver award was fantastic.

How did you get nominated? Was it for a particular piece of work?

It’s been quite an exciting year, having been nominated last year it’s amazing to be shortlisted again. Over the last 12 months I’ve refreshed two national stations, rebranded some of Radio 1’s most iconic shows and produced promotions for the BBC’s largest ever live music event.

When you started university, did you have a career path in mind?

As I touched on earlier, I never thought I’d be working in radio. Even though I grew up listening to Radio 1 and always thinking how awesome it would be to work there, I never dreamt it was a possibility. I went to university to pursue photography and web design, but then getting hands on making radio really made me think that was the direction I wanted to head in. Doing the broad-course meant that I could change my focus fairly easily and from second year onwards radio was my main passion.

How did your studies support your professional development?

I still remember a talk from first year, where second year students were sharing their stories of finding work experience in industry - one of the guys was saying that to get in to the BBC you just have to keep applying and applying for placements. That really struck with me as I’d been trying for work experience and not getting anywhere, but with perseverance I finally got in at BBC Radio Leicester during the summer between first and second year. The experience I gained there was incredible and I carried on working there throughout my second and third years, ultimately graduating to a job at the station.

What are the highlights of your career so far?

There have been so many, and they really punctuate my career. From my first time on air at Radio Leicester, to presenting on stage for Heart in Birmingham, through to the first time something I produced was broadcast on BBC Radio 1. One really awesome moment was watching the BBC Concert Orchestra performing jingles for Radio 2 on my very first day at the station. Being part of the process of getting new jingles on air is always exciting and I’ve been fortunate enough to be part of that a number of times - including recording Christmas jingles that I had commissioned and helped develop. Having grown up listening to Radio 1, it’s still massively exhilarating to hear something I’ve made on air. This year I’ve worked on the refresh of The Official Chart, a really exciting project working closely with composers, the show team and presenter, Scott Mills. Nothing though has been more ridiculous than seeing something I’d worked on at Radio 1 being emblazoned on the side of a big tour-bus, that had travelled around universities across the country.

What are your aspirations for the future?

It feels like there’s never been as much change in radio in the UK as there is at the moment, which means it’s a really exciting time to be working in this industry. I really love my job, so will be sticking at making jingles and imaging for shows across the BBC’s music stations for a while!

What advice would you give to students looking to get a job in the radio industry?

Student radio is a really incredible way of getting experience in this industry - you’ve got the space and freedom to try things out, develop your skills and not be afraid of the outcome. Having judged the Student Radio Awards for the last few years, I can safely say that being part of your student station is a great way of getting noticed in industry. Whether it’s Scratch Radio at BCU, or another station at another university, I’d urge everyone interested in radio to get involved. It’s now easier than ever to start making radio, and I’d say that if you don’t do student radio then just start making content. Start a podcast, upload mixes to Mixcloud or get involved in community radio - you can build your skills, hone your passion and find your niche.