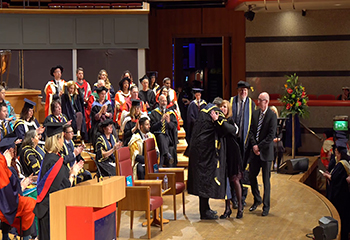 Lyra McKee, the young Northern Ireland journalist fatally shot during rioting in Derry in April 2019, has been posthumously awarded a Master of Arts degree in Online Journalism by Birmingham City University.

Lyra's sister Nichola Corner and brother-in-law John Corner received the award from Professor Alison Honour, Pro-Vice-Chancellor and Executive Dean for the Faculty of Art, Design and Media, during the university's first graduation ceremony of the year, held at Symphony Hall Birmingham.

Belfast-born editor and writer Lyra McKee, described as a ‘very special student’ by her former lecturer Professor Paul Bradshaw, studied for a distance learning Master’s degree at the University between 2012 and 2014.

Lyra worked tirelessly not just in her journalism but in helping others around a wide range of causes, in Belfast and beyond, by opening doors and helping others gain useful contacts and opportunities. She made friendships in all walks of life, and it was the same attention to people that drove her to succeed in her writing. We feel very honoured and privileged that the university has conferred this honour upon her. We wish she'd been here to accept the award for herself, but we continue to be proud of her achievements as we've always been.

In his introduction to the award, Birmingham City University Vice-Chancellor Philip Plowden described Lyra’s work as an inspiration, saying, “Lyra was 29 when she was killed. She was an outstanding young journalist whose book Angels with Blue Faces was about to be published. She wrote about the consequences of the Troubles, a world in which she had grown up. There are no positives to be drawn from her death, we are all the poorer for it. But it reminds us why we need great journalists, we need those who can uncover truths and open our eyes to things we may have chosen not to notice. I am very proud that Lyra was part of our community and I’m proud that she was such a powerful example of our individual ability, each and every one of us, to work to change the world around us.”

A winner of the Sky News Young Journalist Award in 2006 at the age of 16, then named as one of the ‘30 under 30 in media in Europe’ by Forbes a decade later in 2016, Lyra McKee had forged a reputation as an inspiring and tenacious investigative journalist.

During her career, she also delivered training courses to journalists at The Times and The Sunday Times, presented an acclaimed TEDx talk at Stormont and authored two books, the second of which is to be published in spring 2020.

In 2017 Lyra returned to Birmingham City University for the Rethink Media conference to speak about class bias in journalism.

Professor Paul Bradshaw, Course Leader for the MA Data Journalism and the MA Multiplatform and Mobile Journalism at Birmingham City University, said: “Lyra’s path to studying journalism at Birmingham City University was, like her, special. The tenacity and creativity that took her to BCU continued throughout her work here, and on into the successes that led to her pausing her studies. Lyra was a very special student, a very special writer, and an inspiration to many. It was especially important to see her achievements during that time recognised by the University — and this award demonstrates that."

Belfast-born journalist Lyra McKee was named as in the "Best of Irish: 10 rising stars of Irish writing" list by Irish Times Books Editor Martin Doyle, a month before she was shot during rioting in the Creggan area of Derry, in Northern Ireland. Her success in journalism meant she increasingly dedicated her time to researching and breaking news stories; her achievements in this field meant she was unable to formally graduate from the University.