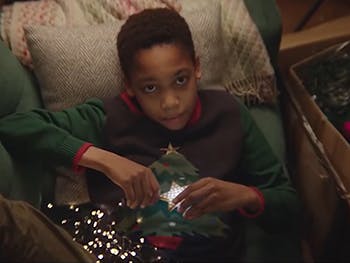 This year, Christmas feels different. With restrictions having been eased for a good while, despite the figures shared by the NHS, the hopes for a more normal Christmas are high and have perhaps more foundation than this time last year when announcements were made, and rethought, many a time.

The big ‘C’ last year wasn’t Christmas, it was Covid - the pandemic that stole Christmas - and the retail ads we saw avoided making direct reference as we were all too aware of the dire situation and very much needed our spirits lifting in any shape or form.

And that is what the Christmas ads have come to be - an ‘event’ where we look for heartwarming tales and funny takes on the festive season. Last year we knew that things were different and the ads too needed to adopt a different approach, so it is with much interest we have waited to see what the tone will be for this year.

There does seem to be a more positive vibe - or hopefulness - and retailers will indeed be keeping their fingers crossed that the figures this year are more encouraging.

A poor Christmas sets the next year up on the wrong foot and many retailers, from food to homeware, rely on the festive season bringing home the bacon - and not giving them a turkey in terms of sales - as the retail road ahead can be rocky and hard to recover from.

The nation’s mood has shifted and we feel more grateful and optimistic than before, with social events on the calendar and booster jabs available to book. But there’s a complexity this year that we didn’t have 12 months ago - supply issues, caused by the HGV driver crisis, Brexit and so on.

You can see how keen retailers are to strike while public sentiment is positive - the ads this year started early and with bold hopes that people would be part of ‘the early club’ (as Very encouraged us to be - probably wise given the concerns around stock levels) and the king of the Christmas ads, John Lewis, has revealed their big budget effort ten days earlier than last year, with teasers dropping even earlier to get people ramped up in the excitement.

It’s almost become a sport, to try and spot any clues of the John Lewis ad before it officially arrives in our screens. They throw everything into telling us a heartwarming tale and this year is no exception. Storytelling is a device used by advertisers to make their products and brand purpose resonate and the Christmas ads have become part of our festive traditions. We want to see familiar stories being told because Christmas is about tradition - and it is tradition for commercialism to be at the heart of our celebrations. Advertisers show how spending money makes Christmas a success - whether it is getting in early, or finding the perfect present, or preparing a delicious feast that makes the whole family happy - there are great expectations placed on this season, by ourselves and for retailers who need strong sales to give them a good year ahead.

The John Lewis effect is about have a simple message within a touching tale - something we can relate to, like a child’s excitement or doing something special to make other people smile. At Christmas, everything is promotable.

Nobody wants coal in their stocking, and no advertiser wants a Christmas turkey. The ads receive great scrutiny because they have become central to our festive countdown and we expect them to be reflective of our lives if they are going to resonate. It’s the water cooler moment where everyone wants to have seen it and to share their opinion.

John Lewis is early this year because they say shoppers are searching earlier and the time felt right - indeed, if people are worried about having turkey on their table and presents under the tree, you need to get your brand seen or you’ll miss the sleigh.

This year, John Lewis delivers all the goods you would expect with their alien themed ad. A classic song remade, the joy of Christmas explored and reminding us of our first Christmas and the magic of this time of year as seen through the eyes of a child. We have come to expect this type of story and they have delivered a cracker - one that has an emotional resonance that feels very in keeping with the mood of the nation. We very much want this Christmas to be as special as those we remember from the past and the alien is a good allegory for how we have all perhaps felt these past 20 months. John Lewis wants us to return to the heart and meaning of Christmas and the alien and his friend delivers this message in a tear-jerking bow. The fact it is reminiscent and draws parallels in our minds with family favourite film ET, means that nostalgia is another device being employed to great effect.

The idea is to make us think or smile, and ultimately stop and then shop. The alien provides a unique way to reflect upon the traditions of the season and to chuckle at ourselves - and who doesn’t need some light relief this year? Time will tell if the alien tale can make this happen and deliver John Lewis a Christmas that’s out of this world.

The whole release this year was a carefully choreographed event, with teaser installations appearing on the streets in London and Newcastle, a hashtag doing the rounds and the press preparing us from the night before, having been given the heads up. Interestingly, this year the ad has aired on social media first, with snippets shared by broadcasters, but it won’t actually air on TV until tonight during the Pride of Britain Awards  - prime time viewing. Instead of teddies, this year John Lewis will be selling the Christmas jumper given to Skye in a representational act during the ad – and what better way to encourage a direct sale.