The event, now in its 5th year, is part of Europe’s biggest South Asian Film Festival and offers a fantastically entertaining collection of independent films.

School of Media students from all years were given the opportunity to volunteer at the Festival, taking on a variety of roles such as photography, video production, audio recording and editing.

Rosie Mulhern is currently in the first year of her course studying BA (Hons) Media and Communication. Rosie’s main role at the event was being a photographer, taking photos of a variety of activities such as Q&As, crowd shots, red carpet shots, vox pops and the School of Media team.

Ben Woolman is currently in the final year of his course. Having now volunteered at the Ffestival three times, Ben’s roles and responsibilities have increased year on year; from distributing flyers to videographer roles to becoming the Festival’s Editor. As Editor, Ben is responsible for assembling the footage recorded by other volunteers.

We spoke to Rosie, Zohair and Ben to find out more about the Festival and what they gained from their volunteering experience:

How did you get the opportunity to volunteer and why did you choose to get involved?

Rosie: I received an email from my TV tutor, Dharmesh Rajput, who is also one of the Festival volunteer organisers. He told me what a great opportunity it was to be involved with to gain industry experience. I have a keen interest in TV and film production so it didn’t take much convincing. Before the Festival I didn’t know much about Indian film so I was looking forward to gaining an in-depth insight into this. I knew it would be a rewarding experience as not only were we able to sit in and watch all of the films, but we were also able to watch and film the Director’s Q&A’s after the films. These were really insightful and useful.

Zohair: Dharmesh told me about the opportunity and I also saw it advertised on BCU’s JobBook page. I chose to volunteer because I knew I’d meet a lot of people from the film and media community and it would be a good chance for me to build my network. I was also excited about watching the amazing art movies, which I believe will help me in my own media future as I want to become a cinematographer and join the film industry.

What was your highlight of the Festival?

Rosie: Being a photographer on the red carpet on premiere night was a very fast-paced and exciting task, giving me an insight into professional photography and the skills needed. Things such as having to be decisive under pressure, having the confidence to give others direction and just knowing what works well in terms of composition. One of my photos from the night ended up being featured in Variety Magazine online which was amazing!

The BIFF organisers were very helpful and supportive and were all about ensuring we could showcase and improve our skills through this opportunity, whilst showing what we were capable of.

Zohair: The highlight of the Festival for me was interviewing Mr. Anubhav Sinha, the Director of Article 15. He is a big name in Bollywood and has directed various movies. Being able to have a chat with him was a big deal for me, he is an amazing person and very friendly.

What was the most useful part of volunteering at the Festival?

Rosie: Having the opportunity to put my existing skills to use and learn in a professional setting. The Festival has given me more confidence to work independently, as well as confidence in my own creative decisions. I have definitely improved my skills in photography, composition and editing.

Ben: I do think the Festival gives you the chance to enhance a wide variety of existing skills. If your verbal communication skills are lacking then the leaflet distributing drives you to confront that fear by having to approach people and tell them about the event. It can also help you to improve technical skills with the video and audio equipment outside of university hours. It encourages you to be a little more independent with hiring equipment and setting it up promptly for each event. Volunteering gives you a realistic experience of working in the media world, the more experience you have, the more confident and prepared you are for a future career in the media industry. 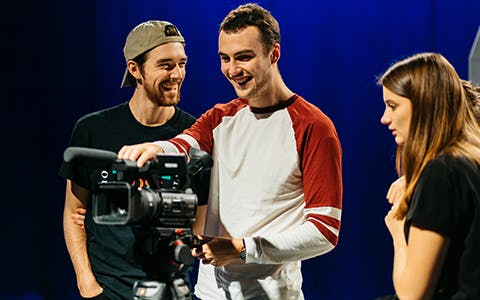 Inspired Festival: a Senior Research Fellow’s journey to creating an i...