38 School of Media students are taking on the challenge of launching FADE, a dance-based radio station. As part of their radio module, students will be launching their own pop-up station on Monday 14 January and broadcasting until Sunday 27 January.

Ahead of the launch we caught up with FADE's Marketing Manager, Charis Pardoe, to find out more about the station and what her role has involved so far.

Can you tell us more about the team behind FADE?

The station will be the most diverse radio station the city has seen. An Ofcom report from June 2018 shows the lack of diversity in the radio industry with a minor 6% of the radio workforce being from ethnic minorities, whereas FADE proudly has an astounding 36% of members being from different ethic backgrounds.

Additionally, it is widely known that there is a lack of females in the radio industry, especially in senior management roles. Currently females only make up 37% of senior leadership roles within the industry. FADE combats this lack of representation by having 9 out 14 management roles being led by females.

Where will FADE be airing from and what can listeners expect to hear?

FADE will be airing from the heart of our City Centre Campus and will be playing upbeat dance music to match the vibrant buzz of Birmingham. There will be live radio shows and pre-recorded specialist shows going out 24/7. The shows will touch on different dance genres such as Dancehall, Afrobeat’s, Hip Hop and Soca.

The station kicks off bright an early Monday morning with experienced presenters Tristan Hall and Steven Pascall 8-10am and the high energy will be carried on through the two weeks.

What has your role as Marketing Manager for FADE involved so far?

The role of marketing manager was a lot bigger than I originally thought. I have been involved with everything from creating the station's logo and branding, to pitching for a budget for the station from the University, placing the orders for all the promotional material that was needed, overseeing the creation of the website, the social media pages and all of the visual content, decorating the studio, contacting the press about the launch, working with advertising and sponsorships to figure out competitions that will be running, and organising street team events to promote the station. I couldn't have done it without the support of my assistant Charlotte Hurrell. 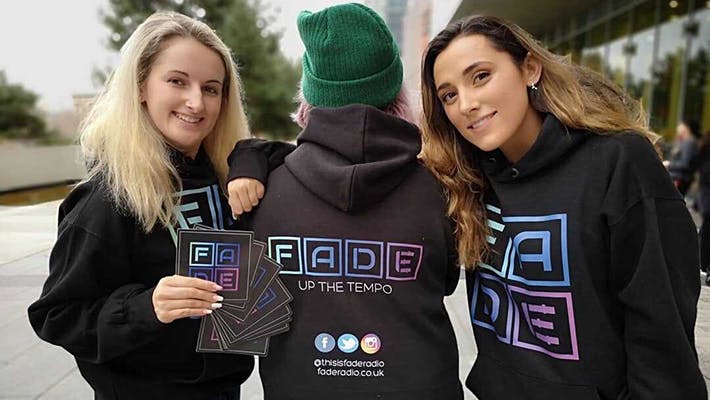 What responsibilities will you have while the station is live?

My role becomes less stressful when we go live, however I will still be in charge of overseeing the work of the social media and visual content teams.  As well as organising a street team as and when needed.

I will also be hosting my own show with Charlotte Hurrell, 2-4pm on Monday, Tuesday and Wednesday of the first week.

What are you looking forward to most about the next two weeks?

I'm looking forward to actually going live and the audience being able to interact with the station's presenters via our social media. My little sister is also going to be coming on my show (via phone call), to play a game of 'Which Charlotte is it?', as she is also called Charlotte.

What’s the most important thing you’ve learnt in your role?

I think the most important thing I've learnt, and probably what the entire group has learnt, is that communication is key, because even if you think your roles are not connected it may turn out that what you are doing can really help and aid another area of the station.

How do you think the experience of being a Marketing Manager for a radio station will help you in the future?

I would like to go into the marketing of radio stations after graduation, so this experience has been a really useful to gain that insight, as we have never really touched upon marketing before within our course.

How I ended up studying BA Media and Communication (Public Relations) ...