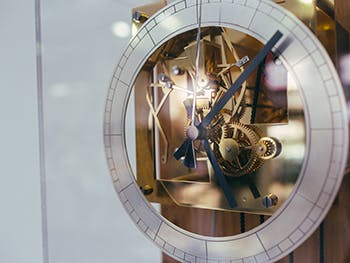 As a student on BA (Hons) Horology you’d have the opportunity to exhibit as part of the Inspired Festival in your final year. We have an excellent relationship with key members from industry who visit the show on a yearly basis, awarding prizes and giving students an excellent opportunity to create key contacts for your career.

We’re keen to share our graduate successes with key industry publications. Course Director Jeremy Hobbins recently wrote an article for the Horological Journal , giving background on the Horology exhibition as part of the graduate show.

Jeremy goes on to write:

Once again the School of Jewellery BA (Hons) Horology Final Year students took part in the Inspired Festival in June, and those of you that were able to come along and see their work close up certainly had much to enjoy. We had a number of inspirational examples of Horological mechanism that really clearly demonstrated the culmination of their three year degree with us in a very tangible way.

The top prize at our Industry Awards Evening went to Simon Colston and his clock entitled “A Study of the Arnfield Escapement”.  Simon created a mechanism of his own design and managed to use the Arnfield Gravity Escapement coupled with a half seconds pendulum to create a clock that effectively ticked “seconds”. A really beautiful piece, Simon received awards from the Worshipful Company of Clockmakers, the Antiquarian Horological Society (AHS), HS Walsh, and from the LVMH Watch & Jewellery UK group for his efforts on the course. Not only did his work earn him several prizes, but also his work on the degree programme across all three years of his study earned Simon a First Class Honours degree in Horology.

The group however was very closely on his tails however, with Samantha McAteer-Moreau receiving a Highly Commended from The AHS for her Major Project, but also earning her a much prized Christopher Ward Watch for her technical innovation in creating a huge wheel for her Skeleton Clock with an enticing title of “Pendule Squelette à Grande Roue”. Samantha made this clock as a Wedding present for her partner, who was utterly delighted to see it for the first time in the Inspired Festival at the School of Jewellery.

Dean Lowe produced a well-executed Regulator, which achieved exactly what he had set out to do. A very well made and reliable timepiece with Harrisons Maintaining power via a counterweighted detent hanging upside down under the Great Wheel.

Other mechanisms on show, but not quite completed, were a fine fuse movement from Thomas Wilkinson, a gothic inspired Skelton clock with a Tellurium Complication by Ruth Dobie who also won an award from The Richemont Group for her Escapement Drawings, and a very bold Timepiece with Jump Hour indication by Adrian Tu.

It is a huge undertaking to design and make a bespoke clock and the items presented clearly showed the skills of the makers and the unification of their theoretical and practical abilities. That said, it must not be forgotten that these new horologists also complete a wide range of repair portfolios that showcase their servicing/restoration skills in a way that also clearly reinforces their employability.  A former student of BCU, and indeed of West Dean, Max Van Brauge very generously sponsored a prize that was awarded for Servicing Skills and this was awarded to Thomas Wilkinson for his excellent work in this area.

BA (Hons) Horology doesn’t just allow the students to gain Horological skills. The transferrable skills gained on the degree equip them just the same as any graduate to join the employment market at Graduate level, but we know their hearts lie with horology and most have already secured employment working in the industry.