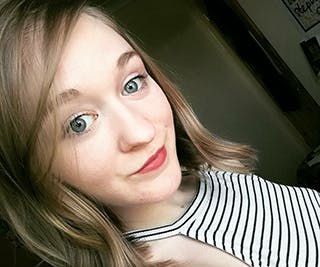 Former BA (Hons) English Language and Literature student, Naomi Owen, answered a few questions for us about her time at Birmingham City University and what she has been doing since she graduated.

Hi Naomi. What course did you choose to study and why?

I studied English Language and Literature. The decision to study English was really easy, almost as if there were no other options. I had loved reading and writing from a young age. It was my best and favourite subject in school and college. I had no idea what I wanted to do career-wise but knew this degree would take me a step closer. I chose Birmingham City University's course because of the huge variety of modules and the flexibility we were given in choosing them. I chose to major in Language because I have a strong interest in sociolinguistics and felt that, in comparison to Literature, Language offered an element of certainty in its findings.

When you started university, did you know what you wanted to do as a career?

I had no idea what I wanted to do for the majority of my time at university. I changed my mind multiple times!

I would recommend that all students try to get any work experience available to them, especially if they have no idea where they want to go career-wise. I volunteered for the REP Theatre and a children’s literacy charity called Beanstalk. These experiences were really valuable, not only did they give me an insight into the world of work, they also allowed me to gain many transferable skills and looked great on my CV. I felt that I was making the most of my spare time and enjoyed meeting new professionals who were happy to answer any of my questions. Although neither of these placements were in the industry I work in now, it was just as important for me to find out what sort of jobs didn’t suit me. If I hadn’t done this I could have ended up applying for so many jobs that weren’t right.

I also took part in the Inspiring Futures Mentorship Scheme and Graduate Plus which both helped me identify my strengths and made me feel positive about my job applications and interviews. I still keep in touch with my mentor now via LinkedIn and he is always happy to give advice and support. His role as a mentor was extremely beneficial as it gave me a link to the world outside the bubble of university life.

What is your current role?

I have been working for West Midlands Police since November and have just finished my training to be a Force Contact Officer. This involves taking emergency and non-emergency calls, grading their severity and making sure the correct resources are sent out if necessary. I also carry out intelligence checks and create crime reports amongst other things. I never thought that working for the police would be possible with my degree, however the skills and interests I gained during my three years at Birmingham City University really helped with my initial application and the subsequent recruitment process (which took ages!). Effective communication skills and research capabilities are critical for the role and I developed these a huge amount at university.

Between graduating and starting training with WMP I made sure to make the most of my time off. I returned to my fabulous summer job working on festival ice cream vans with a lovely team who I still keep in touch with now. I have been on holiday to Rome, the Edinburgh Fringe Festival and Lanzarote and I spent plenty of time with my wonderful family.

How has your life changed since you have graduated?

I’ve started reading again! For fun! This was something that became less and less of a priority while I was at university thanks to masses of course material and a Netflix subscription.

I have also moved in with my boyfriend Tom and we have a naughty pet hamster called Penelope.

I continued working for a little longer after graduating, on a piece I had submitted to the Southern Journal of Linguistics titled ‘‘Foxy Knoxy’ and Femme Fatales: Media Representations of Women and Crime'. It has now been published and I am awaiting my copy to arrive all the way from the University of Mississippi.

What main skill from your university days will you take with you through your life?

Throughout my time at university my personality definitely came into its own and through being surrounded by like-minded people I felt happy with myself and the values I held. I would argue that the relationships you make and the independence you gain whilst at university is just as valuable as achieving your degree. My confidence has grown considerably and continues to do so. This has definitely stemmed from the social side of university and also the opportunities we were given in seminars to voice our ideas, free of judgement. Having this as my foundation will always help me with whatever knock-downs I face.