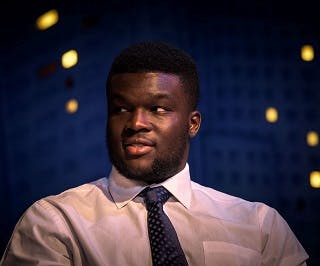 Former BA (Hons) English and Drama student, Esmonde Cole, answered a few questions for us about his time at Birmingham City University and what he has been doing since he graduated.

Hi Esmonde. Did you always want to study your chosen subject at university or did you change your mind when you were researching/applying?

I initially wanted to try out for drama schools but my love for English and the flexibility of the course convinced me otherwise.

What challenges did you face while studying here, and what support did BCU/your Faculty provide you during your degree?

I was lucky to only incur one big challenge whilst I studied at BCU, and that involved my final year course project file (Drama Workshop) getting corrupted the night before the deadline. Luckily, Robert Lawson swooped in to save the day and recovered the file just in time!

In what way do you think BCU developed you as a person for you to flourish in your chosen career path?

BCU helped me become articulate with my words. This really helped me get in the room for a lot of auditions when I started out acting professionally. As someone without an agent at the time, I had to rely on numerous self-written cover letters to help me get a job. So being able to convey myself in a focused and pithy manner set me apart from the rest and served as a catalyst to getting selected for roles. This was something that was credited to me when landing the role of Macbeth on the UK tour. The tools I picked up from the lecturers at BCU has put me in good stead till this very day as a freelancer.

Did you gain any relevant experience whilst studying at BCU that allowed you to easily adapt to your job role?

As the course was so flexible, it allowed me to delve into the mindset and structures of different forms of literature I’d never even considered. One being radio writing, which paved the way for a passion for voice-overs and enabled me to translate the theoretical teachings into practical use when it came to recording characters in a professional studio. My appreciation for form and structure gave me the confidence to approach these parts of the industry with a level footing

What key skills have you been able to take into your job role and how have these helped you excel?

Being able to competently express my thoughts and streams of analysis on the page, has allowed me to articulate myself on the stage, screen or recording studio in a different type of way. The course has carved out new ways of thinking about character development or story structure, that I would not have realised if I didn’t study English & Drama at BCU.

If you have any advice for anyone who is studying the course you studied, what would you say?

Take every opportunity to explore things outside of your comfort zone. The teachers are great and will keep you on track.

Can you tell us some exciting things you have been involved in since starting your new job role?

Since leaving university I’ve performed for Stormzy at his #MERKY Clothing Line Launch, I can be seen in the FMV video game ‘The Shapeshifting Detective’ as Zak Weston. I played Cei in The Snow Queen at The Park Theatre, and you can currently see me alongside David Mitchel in Channel 4’s comedy ‘Back’ (Episode 3). As of writing, I’ve recently wrapped up filming for a new series of CBBC’s comedy So Awkward and will be starring in a new BBC One comedy alongside Greg Davies later this year.

What does BCU mean to you?

A place to hone talents you never knew you had.