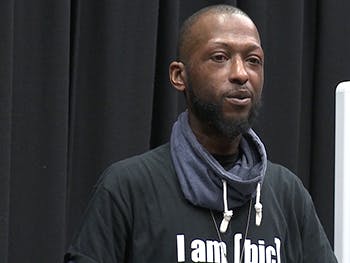 Shakespeare’s most famous words have been given a modern rap twist as part of a project aiming to bring the Bard to a wider audience and mark the 400th anniversary of his death.

English and Drama students at Birmingham City University have been working alongside the Sonnet Man, a US rap artist who delivers Shakespeare’s sonnets set to hip hop beats.

Rapper and teacher Devon Glover became the Sonnet Man in a bid to make Shakespeare more accessible to young people - particularly to those from low income backgrounds.

He visited the University to work with students on understanding the meaning behind Shakespeare’s words, as well tasking them with putting their own modern spin on the famous words, with Sunday (April 24) marking 400 years since the playwright’s death. Among the well-known lines examined was Sonnet 18, most famously recognised for the words “Shall I Compare Thee To A Summer’s Day?”

Devon Glover, The Sonnet Man, said: “I began this project to show a connection between Shakespeare and my world of hip-hop.

“In my neighbourhood, our major  genre of music and culture is hip-hop. However, there is a huge perception that Shakespeare is not for certain neighbourhoods - particularly low-income - leading to the disconnection.

I've noticed the correlation between my students understanding the Bard and a rise in their confidence levels.  This project was also made to inspire my students to strive to become the next Shakespeare.
The Sonnet Man, Devon Glover

After working with students The Sonnet Man performed a number of the passages in front of a live audience.

He said: “It's important to give the students something different, so while we do discuss the literary texts in detail, it's good to be as diverse as possible in how we present the literature.

“Shakespeare in particular is as relevant today as ever, and the Sonnet Man is able to demonstrate some of that relevance.

“Hopefully, my Shakespeare students will walk away from this course thinking of it as a unique experience, and I'm happy that the last few months have been different to what they expected.”

“His songs were catchy and it really did reinforce the fact that Shakespeare was meant to be performed. As a performer, he was charismatic and very good at getting the audience involved.”

The University has marked the anniversary of Shakespeare’s death with a celebration of his work.

Earlier this year students from School of Visual Communication created a life-size paper tribute to the Bard.

While students from Birmingham School of Acting have been performing a Black Country translation of Hamlet, known as Yamlet and Macbeth performed in the style of acclaimed director Quentin Tarantino.

Emma Blyth, second year English and Drama student at Birmingham City University, said: “The Sonnet Man was able to create in me even more admiration for Shakespeare’s work.

“His songs were catchy and it really did reinforce the fact that Shakespeare was meant to be performed. As a performer, he was charismatic and very good at getting the audience involved.”