The poetry of 19th century icon Elizabeth Siddall is to be published for the first time according to her original manuscripts - more than 150 years after her death.

A new book will publish some of Siddall’s best known poetry, and fragments of previously unseen work, as they were originally written and without the edits which feature in all previously printed editions of her work.

Dr Serena Trowbridge, Senior Lecturer in English Literature at Birmingham City University, has produced the book ‘My Ladys Soul: The Poetry of Elizabeth Siddall’ after scouring through the writer’s original manuscripts which have been preserved at the Ashmolean Museum in Oxford.

All previously published versions of Siddall’s poetry were edited by her brother-in-law William Rossetti before publication, a fact which remains little-known despite her cult following.

Now Dr Trowbridge has collated and published the writer’s poetry, with each piece being 100 per cent faithful to Siddall’s original scribing.

Rossetti, who was responsible for publishing all of Siddall’s work, would make corrections to her writing to alter the grammar and remove elements which he deemed to be too personal or too sad.

But 156 years after her death Siddall’s work will now be seen as it was originally written, and Dr Trowbridge believes the original manuscripts give a truer reflection of Siddall’s own voice and also reflect the social class she came from.

Dr Trowbridge said: “For too long, Siddall has been seen as the face of the Pre-Raphaelite painters, the muse and wife of Dante Rossetti, and the model for Millais’ Ophelia.

I’m really happy to be able to show her as a creative woman in her own right; she was a painter, which is more widely known, but her poetry has always been overlooked.
Dr Serena Trowbridge

“As a young woman from a fairly poor background, her education was rudimentary, but her feeling for poetry and her knowledge and understanding of poems came from her reading of Tennyson, Blake, Shakespeare, and Walter Scott’s ballads.

“Her own authentic voice is clear in her poems, and I really hope that this book will encourage others to read her poetry and to research it further.”

My Ladys Soul will be published by Victorian Secrets, and independent publisher specialising in producing books from, and about, the nineteenth century. 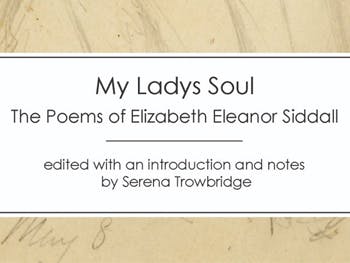 The book’s name uses a missed apostrophe in the word ‘Ladys’, echoing the faithful publication of Siddall’s original wording which runs throughout the book.

Each poem is accompanied by notes from Dr Trowbridge detailing analysing the works and their significance to Sidall.

Sidall who died in 1862 was married to Dante Rossetti a member of the Pre-Raphaelite Brotherhood, a group of artists who rejected the artistic methods of those who succeeded Raphael and Michelangelo.

She is best known as an artist, and a model for the Brotherhood group but had many pieces of her poetry published.

Most of her work was published after her death, with very few people knowing that she wrote such pieces of work.

My Ladys Soul: The Poetry of Elizabeth Siddall will be officially launched during an event at the Birmingham & Midland Institute on Friday 28 September.

Review copies of the book can be made available on request.

The publication comes as Birmingham City University prepares to celebrate its own historic links to the 19th Century with the 175th anniversary of Birmingham Government School of Design – the forerunner to its present day Schools of Art and Visual Communication.

A series of events will be hosted across the University to commemorate the legacy of the institution which was formed in 1843 and would provide the foundations for Birmingham City University today.